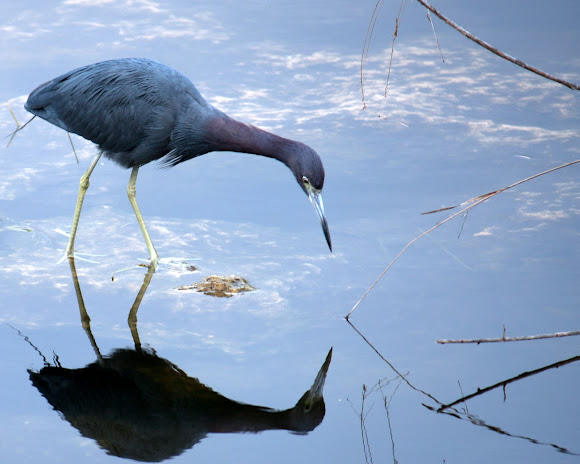 The Little Blue Heron, Egretta caerulea, is a small heron. It breeds from the Gulf states of the USA through Central America and the Caribbean south to Peru and Uruguay. It is a resident breeder in most of its range, but some northern breeders migrate to the southeastern USA or beyond in winter. There is post-breeding dispersal to well north of the nesting range, as far as the border between the US and Canada. The Little Blue Heron's breeding habitat is sub-tropical swamps. It nests in colonies, often with other herons, usually on platforms of sticks in trees or shrubs. 3-7 light blue eggs are laid. This species is about 60 cm (24 in.) long, with a 102 cm (40 in.) wingspan, and weighs 325 g (11.5 oz/0.72 lbs). It is a medium-large, long-legged, heron with a long pointed blue or greyish bill with a black tip. Breeding adult birds have blue-grey plumage except for the head and neck, which are purplish and have long blue filamentous plumes. The legs and feet are dark blue. Sexes are similar back. Non-breeding adults have dark blue head and neck plumage and paler legs. Young birds are all white except for dark wing tips and have yellowish legs. They gradually acquire blue plumage as they mature. White Little Blue Herons often mingle with Snowy Egrets. The Snowy Egret tolerates their presence more than Little Blue Herons in adult plumage. These young birds actually catch more fish when in the presence of the Snowy Egret and also gain a measure of protection from predators when they mix into flocks of white herons. It is plausible that this is because of these advantages, they remain white for their first year. The Little Blue Heron stalks its prey methodically in shallow water, often running as it does so. It eats fish, frogs, crustaceans, small rodents and insects. (credit: http://en.wikipedia.org/wiki/Little_Blue.........)

Asief Abdi,
Thanks! Glad you liked the images...

Everyone,
Thank you... I'm glad all of you enjoyed the shots...
btw, I used to reply to every comment by return email until I learned that it does not work that way. Apologies for delayed acknowledgements and replies...