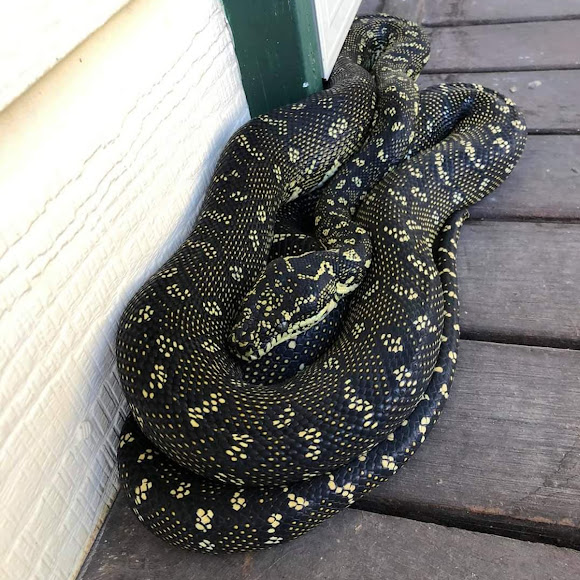 This handsome creature was about 3.5metres long.
Possibly slower than usual due to the cold but still way too big to measure directly. ;-)

Resting on a rear deck in a semi urban area adjacent to eucalyptus dominated bushland.

This photo was taken by my brother near his home just inland from Noosa, Queensland.
They typically remain motionless in a camouflaged position and then strike suddenly at passing prey although this one had chosen a very poor camo backdrop.
The genus Morelia (tree python) has seven species and is found in Australia, New Guinea and Indonesia. It has a distinctive pattern of a black background with cream or yellow spots and blotches but can be variable. The area is inhabited by two subspecies of the six in Australia but I think these markings are distinctively 'spilota' not 'mcdowelli'.
Active by day or night... this one probably waiting to check out the chooks in the back yard pen. Weather is unusually cold currently - 13C.
Known as "carpet" python in Australia because some people like to keep one as a pet in the car ;-)

Chooks will bring the rodents, and both are faves for a happy and healthy python. I really like the Aussie fact at the end of your notes too, Mark!

Handsome indeed. How could I miss this one?

Wow what a beauty! Your brother is lucky with such a neighbour :)