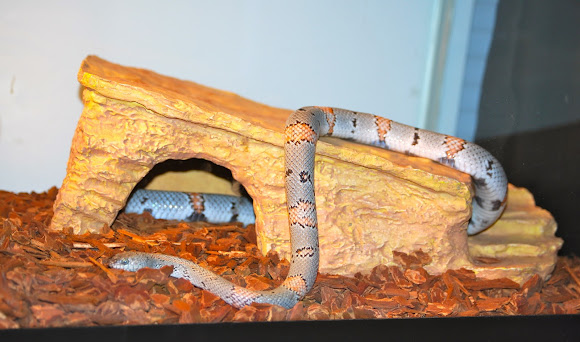 This is my old grey banded king snake his name was Skeeter (the character from doug funny the tv show) because he has this really pretty purple tint. I got him from a pet store in Louisille, Ky when he was a baby, I don't know the exact age but he was about 5-6 inches long. These photos were taken after I had him for 3 years and he was about 3 feet long. Shortly after these photos I went out of the country and gave him to my friend and no longer have him.

I kept him in a large multi gallon tank and changes the size as he grew. He had bark bedding, a rock to lay on and under, bamboo sticks to climb on, and a water bowl that was large enough for him to lay in. For temperature a simple heat lamp is all you need, temp ranging from low 70's to mid 80's. I preferred a black light that you can find at a local pet store because it was easier to sleep with.

I don't actually know if he was a boy, the vet said that he was too small to check and they would have to scope and put him under, i declined and just went on calling him a boy. so sex is unknown.

Very sad indeed.Pets are precious. Beautiful markings. May he rest in Peace!