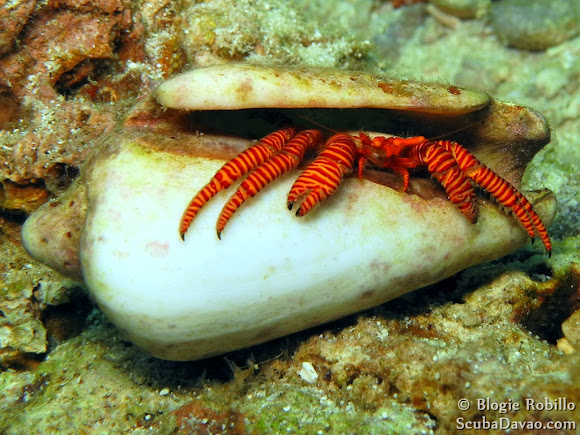 Also known as Cone Hermit Crab, Cone Shell Hermit Crab, Red Striped Hermit Crab, Orange-legged Hermit Crab and Pyjama Hermit Crab. They feed on fish, invertebrates and each other! Unlike other hermit crabs this crab prefers narrow aperture shells such as cone shells. They grow to a length of about 6cm.

Found both day and night in lagoons on sea grass beds, over sand and rubble areas, at depths of 0 to 25m. Widespread in the Indo-Pacific region.

That is a cool pattern on its body.

Wow! Nice condo he´s got! and he is very pretty!

Hi Nicholas! Yeah, the critter really stood out against the browns and whites of the coral rubble.