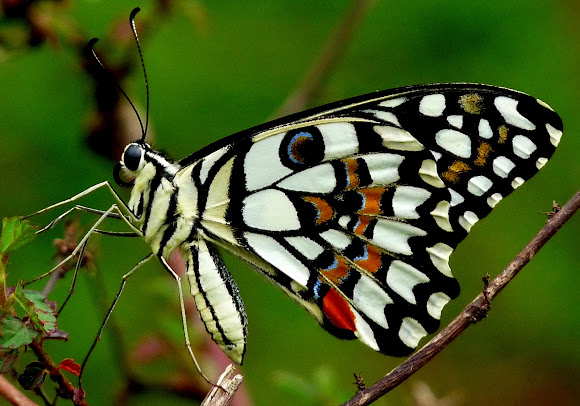 Papilio demoleus, the Common Lime Butterfly, is a common and widespread Swallowtail butterfly. It gets its name from its host plants which are usually citrus species such as the cultivated lime. Unlike most swallowtail butterflies it does not have a prominent tail. The butterfly has also been referred to as the Citrus swallowtail, a name it shares with a morphologically similar species, Papilio demodocus which flies in Africa.

Papilio demoleus is an aggressive and very common butterfly. It is perhaps the most widely distributed swallowtail in the world. The widespread range of Papilio demoleus indicates the butterfly's tolerance and adaptation to diverse habitats. It is to be found in savannahs, fallow lands, gardens, evergreen and semi-evergreen forests and shows a preference for stream and riverbeds. In India it is mostly found in the plains but can be found on the hills of peninsular India and up to 7000 feet in the Himalayas. It is common in urban gardens and may also be encountered in wooded country. The butterfly is also a very successful invader, its spread appearing to be due to its strong flight, increase in urbanisation and agricultural land use that opens up new areas for dispersal, and greater availability of foodplants.

This butterfly is an avid mud-puddler and visitor of flowers. It basks with its wings held wide open on tufts of grass, herbs and generally keeps within a metre above the ground, even on cloudy days. It relies on its quick flight for escape. It is an interesting butterfly in that it has a number of modes of flight. In the cool of the morning, the flight is slow considering that it is an edible and unprotected swallowtail. As the day progresses, it flies fast, straight and low. In the hotter part of the day, it may be found settling on damp patches where it will remain motionless, except for an occasional flutter of wings, if not disturbed. It is also a frequent visitor of flowers in gardens, where it shows a preference for flowers of smaller herbs rather than larger plants such as the ubiquitous Lantana with its plentiful blooms. It can be found swarming in the groves of its foodplants.