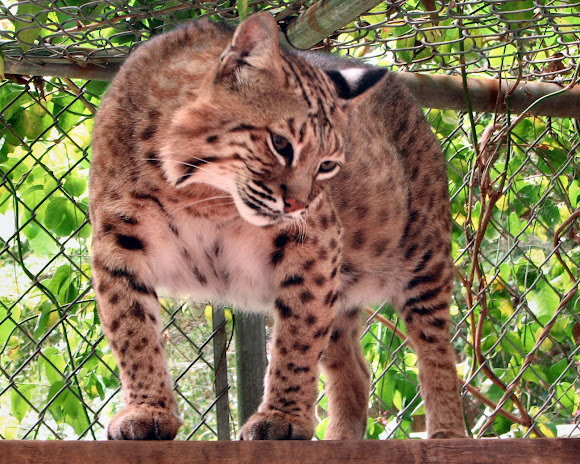 The Bobcat (Lynx rufus) is a North American mammal of the cat family Felidae, appearing during the Irvingtonian stage of around 1.8 million years ago (AEO). With twelve recognized subspecies, it ranges from southern Canada to northern Mexico, including most of the continental United States. The bobcat is an adaptable predator that inhabits wooded areas, as well as semi-desert, urban edge, forest edges, and swampland environments. It persists in much of its original range and populations are healthy. With a gray to brown coat, whiskered face, and black-tufted ears, the bobcat resembles the other species of the mid-sized Lynx genus. It is smaller on average than the Canada lynx, with which it shares parts of its range, but is about twice as large as the domestic cat. It has distinctive black bars on its forelegs and a black-tipped, stubby tail, from which it derives its name. Though the bobcat prefers rabbits and hares, it will hunt anything from insects and small rodents to deer. Prey selection depends on location and habitat, season, and abundance. Like most cats, the bobcat is territorial and largely solitary, although there is some overlap in home ranges. It uses several methods to mark its territorial boundaries, including claw marks and deposits of urine or feces. The bobcat breeds from winter into spring and has a gestation period of about two months. There had been debate over whether to classify this species as Lynx rufus or Felis rufus as part of a wider issue regarding whether the four species of Lynx should be given their own genus, or be placed as a subgenus of Felis. The Lynx genus is now accepted, and the bobcat is listed as Lynx rufus in modern taxonomic sources. The bobcat resembles other species of the Lynx genus but is on average the smallest of the four. Its coat is variable, though generally tan to grayish brown, with black streaks on the body and dark bars on the forelegs and tail. Its spotted patterning acts as camouflage. The ears are black-tipped and pointed, with short black tufts. There is generally an off-white color on the lips, chin, and underparts. Bobcats in the desert regions of the southwest have the lightest colored coats, while those in the northern, forested regions are darkest. Kittens are born well-furred and already have their spots. A few melanistic bobcats have been sighted and captured in Florida. They appear black, but may still exhibit a spot pattern. The face appears wide due to ruffs of extended hair beneath the ears. Bobcat eyes are yellow with black pupils. The nose of the bobcat is pinkish-red, and it has a base color of gray or yellowish- or brownish-red on its face, sides, and back. The pupils are round black circles and will widen during nocturnal activity to maximize light reception. The cat has sharp hearing and vision, and a good sense of smell. It is an excellent climber, and will swim when it needs to, but will normally avoid water. The adult bobcat is 47.5 to 125 cm (18.7 to 49 in) long from the head to the base of the tail, averaging 82.7 cm (32.6 in); the stubby tail adds 9 to 20 cm (3.5 to 7.9 in) and, due to its "bobbed" appearance, it gives the species its name. An adult stands about 30 to 60 cm (12 to 24 in) at the shoulders. Adult males can range in weight from 6.4 to 18.3 kg (14 to 40 lb), with an average of 9.6 kg (21 lb); females at 4.1 to 15.3 kg (9.0 to 34 lb), with an average of 6.8 kg (15 lb). The largest bobcat accurately measured on record weighed 22.2 kg (49 lb), although there are unverified reports of them reaching 27 kg (60 lb). The largest-bodied bobcats are from eastern Canada of the subspecies (L. r. gigas), while the smallest are from the southeastern subspecies (L. r. floridanus), particularly those in the southern Appalachians. The bobcat is muscular, and its hind legs are longer than its front legs, giving it a bobbing gait. At birth it weighs 0.6 to 0.75 pound (270 to 340 g) and is about 10 inches (25 cm) in length. By its first year it will reach about 10 pounds (4.5 kg). The cat is larger in its northern range and in open habitats. A morphological size comparison study in the eastern United States found a divergence in the location of the largest male and female specimens, suggesting differing selection constraints for the sexes. (credit: http://en.wikipedia.org/wiki/Bobcat)

RiverValleyRunner, joshuaknutson -
Thanks... glad you both enjoyed the Bobcat - even though it was a captive rehab...
Apologies for delayed reply...

Amazing shot! Such a beautiful animal!