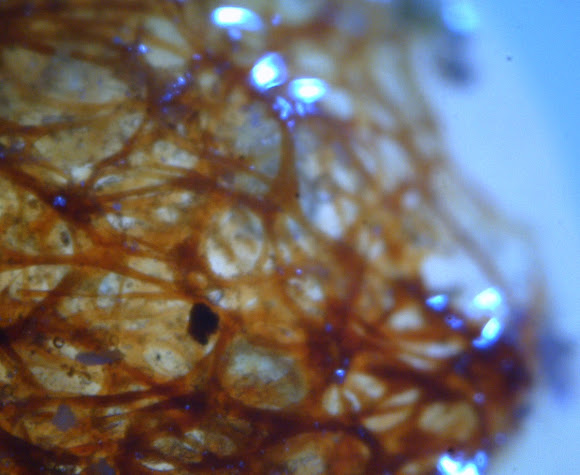 These are magnified ( x 600) pictures of the " dog-vomit" slime mold spotted previously: http://www.projectnoah.org/spottings/869... Pic #1 shows a spun orange coloured floss which is a magnified piece of the yellow crust. Pics #2 & #3 are pieces of the crust and material adhering to it -shows a slimy white substance with hundreds of little spores. The following pictures are those of the dusty black substance that was under the crust: Pic #4 shows a perfectly spherical shape with spores inside and out. Pic #5 shows a layer of spores in a slimy/jelly matrix Pic #6 shows magnified hyphae

I was intrigued by what the slime mold might look like under magnification and so, decided to take these pictures. I acknowledge that they are not real spottings. The crust looks like a dry mass of protoplasmic bubbles. Those spherical shapes were interesting - are they spore sacs??. The spores were well defined and there were thousands of them. I had to soak the mold for hours before I could tease bits away for the microscope. I am hoping that someone can explain these structures further for me...

Thank you for looking at this for me and for all the information, Clive. I looked at these under the microscope out of sheer curiosity and with very little knowledge of slime moulds. When and if I find the species you have recommended, I will try to study these.
The microscope I used is a digital one. It has lighting through the base plate and also has oblique illumination. I used one or the other, sometimes both ( I think this model is no longer available)

This might explain it better - the white material looked like part cooked creamy white polenta - it did have some texture (may be embedded spores?)

Sorry to confuse you Leuba. My comment was totally unrelated to your spotting and more related to my understanding of sliminess.

Emma, I am confused -how does pseudomonas relate to slime mold - are you talking about the "sliminess" I have mentioned? :). The inside of the mold had a slightly slimy look under the microscope - almost like a half cooked white of an egg.

I associate Pseudomonas aeruginosa bacteria with sliminess. We saw a lot of htose on the petri dish in microbiology while culturing various body fluids.