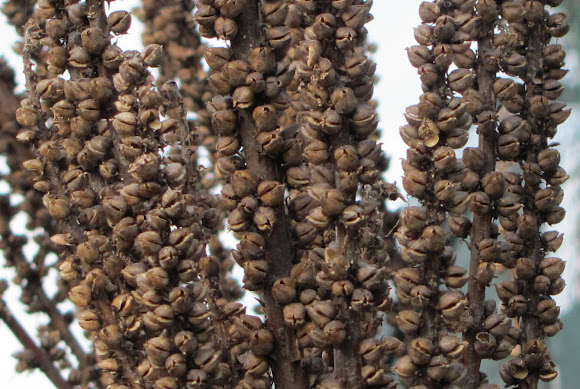 erbascum thapsus is a dicotyledonous plant that produces a rosette of leaves in its first year of growth.[1][2] The leaves are large, up to 50 cm long. The second year plants normally produce a single unbranched stem usually 1–2 m tall. In the East of its range in China, it is, however, only reported to grow up to 1.5 m tall.[3] The tall pole-like stems end in a dense spike of flowers[1] that can occupy up to half the stem length. All parts of the plants are covered with star-shaped trichomes.[3][4] This cover is particularly thick on the leaves, giving them a silvery appearance. The species' chromosome number is 2n = 36

Verbascum thapsus (Great or Common Mullein) is a species of mullein native to Europe, northern Africa and Asia, and introduced in the Americas and Australia. Verbascum thapsus has a wide native range including Europe, northern Africa and Asia, from the Azores and Canary Islands east to western China, north to the British Isles, Scandinavia and Siberia, and south to the Himalayas.[3][38][39] In northern Europe, it grows from sea level up to 1,850 m altitude,[2] while in China it grows at 1,400–3,200 m altitude.[3] It has been introduced throughout the temperate world, and is established as a weed in Australia, New Zealand, tropical Asia, La Réunion, North America, Hawaii, Chile, Hispaniola and Argentina.[39][40][41][42] It has also been reported in Japan.[43] In the United States it was imported very early in the 18th[note 3] century and cultivated for its medicinal and piscicide property. By 1818, it had begun spreading so much that Amos Eaton thought it was a native plant.[note 4][7][44] In 1839 it was already reported in Michigan and in 1876, in California.[7] It is now found commonly in all the states.[45] In Canada, it is most common in the Maritime Provinces as well as southern Quebec, Ontario and British Columbia, with scattered populations in between.[17][46] Great Mullein most frequently grows as a colonist of bare and disturbed soil, usually on sandy or chalky ones.[5] It grows best in dry, sandy or gravelly soils, although it can grow in a variety of habitats, including banksides, meadows, roadsides, forest clearings and pastures. This ability to grow in a wide range of habitats has been linked to strong phenotype variation rather than adaptation capacities

spotted in a local road,in a abandoned agriculture field,near of a wall of a garden house

thanks very much LhadLime for the id