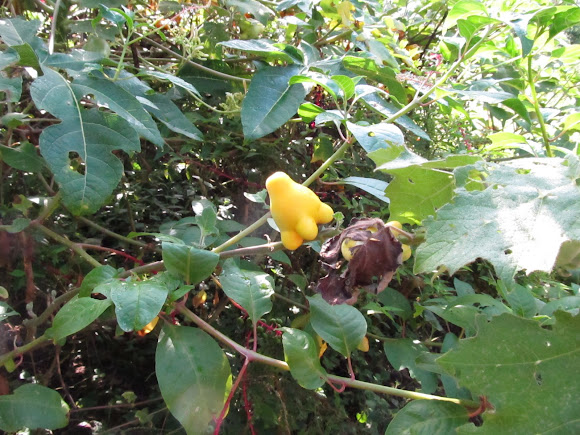 Also called Breastberry; Cow's Udder and several other names I won't mention, these plants are known by the fruit they bear. The fruit is yellow to orange in color and has a rather unusual shape. One end resembles a woman's breast and the other a cow's udder and the fruit is so called by many. It is bell shaped with knobby protrusions on the bottom.

These are found throughout the two provinces of the Amazon rainforest of SE Ecuador that I am familiar with. It is native to South America but has been introduced (naturalized-whatever that means) into other tropical areas (e.g. Southern Mexico, Greater Antilles, Central America, and the Caribbean).

This was amusing. Not knowing any better, I've always referred to it as Cow's Udder plant. As I had no idea where to start in the ID process, I googled that, and there it was. Cool :-) It is ornamental and although poisonous, can be boiled or cooked and eaten. I know of no one here who eats it although it is very plentiful.

Interesting. Do you do anything with it? Here in the jungle it is treated like a weed with no practical use.

Grows in India too!