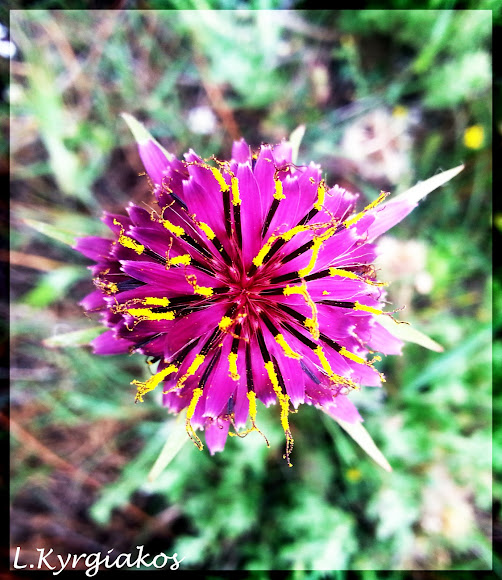 T. porrifolius is a common biennial wildflower, native to Mediterranean regions of Europe but introduced elsewhere, for example, into the British Isles (mainly in central and southern England), other parts of northern Europe, North America, and southern Africa and in Australia; in the United States it is now found growing wild in almost every state, including Hawaii, except in the extreme south-east.The plant grows to around 120 cm in height. As with other Tragopogon species, its stem is largely unbranched, and the leaves are somewhat grasslike. It exudes a milky juice from the stems.In the UK it flowers from June to September, but in warmer areas such as California it can be found in bloom from April.The root, and sometimes the young shoots, of T. porrifolius are used as a vegetable, and historically the plant was cultivated for that purpose. (Wikipedia). As a student in the Department of Agriculture in Volos this plant was my favourite due to its wonderful flower!!!