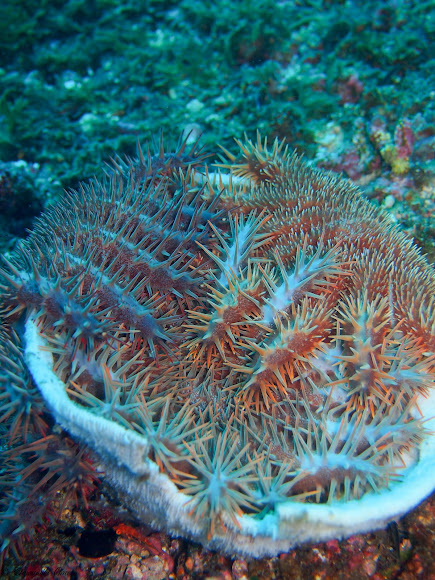 Crown of Thorns starfish are corallivorous venomous starfish. Their populations naturally boom and crash. However in recent years COT outbreaks have become increasingly common. Some believe it is due to warming ocean temperatures and environmental factors, others that it is natural fluctuations in population. Either way, coupled with the other threats imposed on coral reefs, the damage caused can be catastrophic.

This population appears to be working it's way across Monad Shoal - a seamount that hosts important Elasmobranch cleaning stations. Thresher and Grey Sharks, Manta, Devil and Eagle Rays, and Barracuda all come up from the deep and frequent the territories of cleaner and moon wrasse on the Shoal. The COT population was previously seen at another dive site, and has moved down and taken over the oldest known cleaning stations that have had protection from diver damage installed.

The worry is that they will destroy the habitat of the cleaner fish and thus the important cleaning station services. There are few Thresher Shark cleaning stations known globally, and the effect may be drastic. Threshers are known to be susceptible to diseases from the parasites that are removed by the cleaner wrasse.