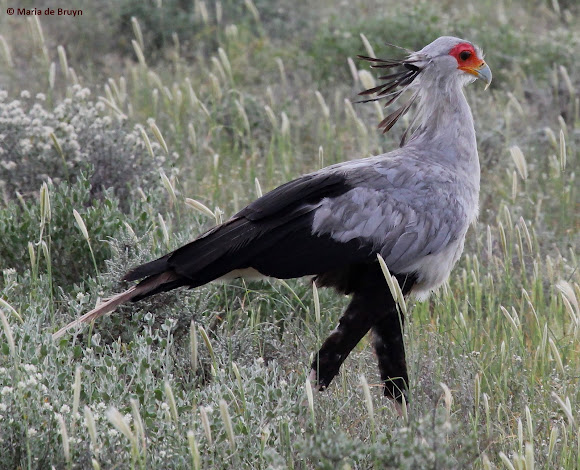 This bird of prey is largely terrestrial, roosting in acacia trees at night. It has an eagle-like body on crane-like legs which increases the bird’s height to as much as 1.3 m (4 ft) tall. It has the longest legs of any raptor and must bend its legs in a crouch to feed or drink. Their lower legs have heavy scales that may protect them while walking through the brush or when attacking their prey. They eat insects, mammals ranging in size from mice to hares and mongoose, crabs, lizards, snakes, tortoises, young birds, bird eggs, and sometimes dead animals killed in grass or bush fires. Secretary Birds associate in monogamous pairs. During courtship, they display by soaring high with undulating flight patterns and calling with guttural croaking. Males and females can also perform a ground display by chasing each other with their wings up and back. They usually mate on the ground, although some do so in Acacia trees. Secretary birds will stay close to their mate even if their chick has already left. Both the parents feed the young. At 60 days, the young start to flap their wings, and by day 65–80 are able to fledge. The young are preyed upon by crows, ravens, hornbills, large owls and kites as they are vulnerable in Acacia tree tops, with no known incidents of predation on adults.

Sub-Saharan Africa, from Senegal to Somalia and south to the Cape of Good Hope; grasslands and savannas.

Its common name is often thought to come from the crest of long quill-like feathers, lending the bird the appearance of a secretary with quill pens tucked behind his or her ear. A more recent hypothesis is that "secretary" is borrowed from a French corruption of the Arabic saqr-et-tair or "hunter-bird." It appears on the coats of arms of Sudan and South Africa. In 1935, the species was moved to its own family, distinct from all other birds of prey.

One of my favorite birds maria

I always thought that there feathers only went down to it's knees, but I guess not.

Thanks for your observation, Joshua - I had never looked at the bird in quite that way before but probably will now always think of it as wearing pants or tights! :>)

The feathers go down so far on the legs that it looks like it's wearing pants!

a great name but a terrible reputation ! Lol

whaaaoooo... this is super.
1.3m height, thats tall. love the pic, and thanks for description.

I really love these photos!!

Thanks, Bernadette, letermagog, Mary. They are wonderful birds, Sachin.

I remember seeing these in Tanzania. They were one of my favorite birds! Great shots!

Great pics! Ditto about the learning

Thanks, everyone. I learn so much through this project because I need to post info (like finding out its scientific name matches my zodiac sign).
@SFrazier - I uploaded the url again and think it is working now. Thanks for noting that!

As a viewer/user, I appreciate your subtle copyright tag which does not distract from the beauty of your photograph!

Beautiful! BTW, You need to replace one of your reference links: Error 404: File Not Found

Cool spotting. This is a really interesting animal.