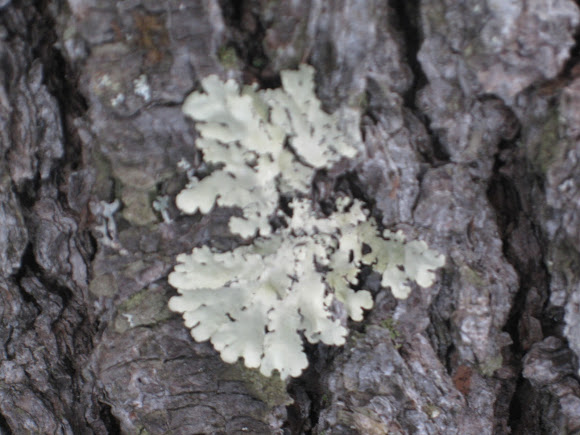 A light, or white, baby green Foliose lichen about 4cm in diameter. Several were found in the same habitat. Common Greenshield falls within the Fungi or Plant Kingdom, the Ascomycota division and the Lecanorales order. The lichen was flat and not very bushy and seemed to excrete from a single spot within the middle of the lichen.

The same species of lichen were found on several spots like tree branches, rocks, stumps, and the sides of trees. We found ours on the side of a large pine tree. It was found in dense woods. I found what appeared to be the same lichen on a small tree branch

We went out with on the 18th of January to look for Lichen. The weather was overcast at about 3˚Celsius. We started to search in dense woods with lots of pine and beech trees. We found several of what appeared to be the same species of Lichen. They appeared to be a foliose lichen. They were a white/baby green color and were about 4cm in diameter. We found several of them on dead tree branches. The lichen were around 4cm in diameter. I identified them as Common Greenshield, a common lichen found on trees, branches and rocks. They are in the Fungi and plant Kingdoms, the Ascomycota Division, the Ascomycetes class, the lecanorales order, parmeliaceae family, and the Flavoparmelia genius.

Next time use more pictures, but overall you did awesome!