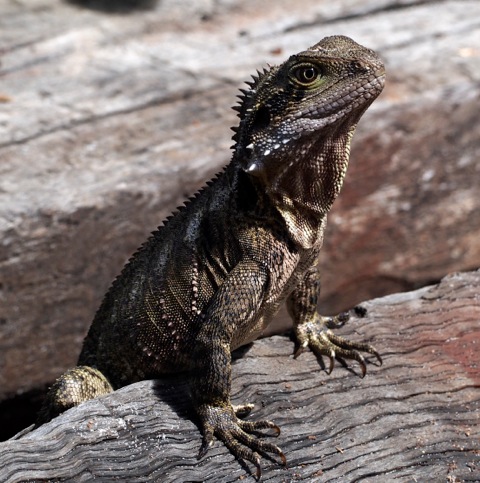 The Australian water dragon (Intellagama lesueurii, formerly Physignathus lesueurii, which includes the eastern water dragon (I. l. lesueurii) and the Gippsland water dragon (I. l. howittii) subspecies, is an arboreal agamid species native to eastern Australia from Victoria northwards to Queensland. This one stayed stationary in this pose for a long time. It was in a garden area of an outdoor restaurant and people were talking, walking past and making quite a noise, but it stayed completely still, seemingly not bothered by them.

Males defend a territory and a harem of females, carrying out an impressive series of head bobs and arm waves to discourage other intruding males. The females lay around a dozen eggs in an excavated hole in sandy soil above the floodline. These will hatch in approximately three months. The young are miniature replicas of the adults and are able to fend for themselves as soon as they hatch.

thanks Nath... so this one is a female or a juvenile, and this one is the male?
http://www.projectnoah.org/spottings/878...