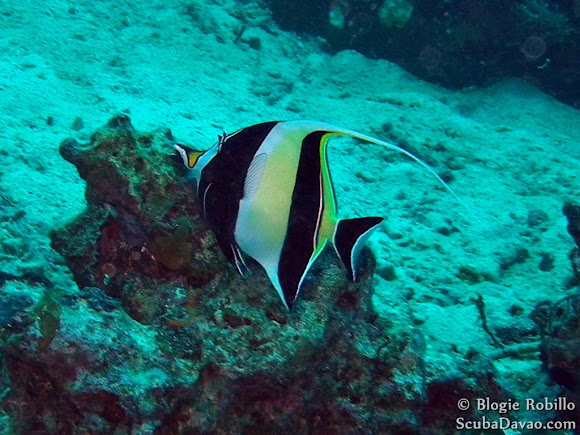 The Moorish Idol is a small (up to 23 cm long) tropical and subtropical marine fish and the only species in the family Zanclidae. Vertically flattened, they sport black, yellow and white vertical strips and a very long white sickle-shaped extension off the dorsal fin ("Zanclus" translates to sickle in Greek). It has bony projections over its eyes.

Found throughout the tropical pacific, it is also native to the coast of East Africa and the Indian Ocean. Individuals have been found off Florida, probably released from aquaria. Zanclus cornutus has a long pelagic (open water) larval stage, which is cited as the dispersal mechanism for this very widely-found species. The Moorish Idol inhabits mostly reefs in shallow waters feeding on corals, sponges and other small invertebrates. Mating for life, Moorish idols are usually found individually or in pairs, but they sometimes school in groups up to 100, especially as juveniles.

(Description and habitat information from EOL.org.)