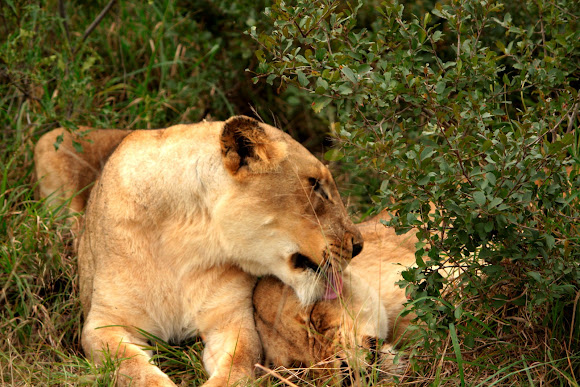 The lion is the tallest (at the shoulder) of all living cats, averaging about 14 cm (5.5 in) taller than the tiger. Behind only the tiger, the lion is the second largest living felid in length and weight. Its skull is very similar to that of the tiger, although the frontal region is usually more depressed and flattened, with a slightly shorter postorbital region. The lion's skull has broader nasal openings than the tiger. However, due to the amount of skull variation in the two species, usually, only the structure of the lower jaw can be used as a reliable indicator of species.[38] Lion coloration varies from light buff to yellowish, reddish, or dark ochraceous brown. The underparts are generally lighter and the tail tuft is black. Lion cubs are born with brown rosettes (spots) on their body, rather like those of a leopard. Although these fade as lions reach adulthood, faint spots often may still be seen on the legs and underparts, particularly on lionesses. The mane of the adult male lion, unique among cats, is one of the most distinctive characteristics of the species. It makes the lion appear larger, providing an excellent intimidation display; this aids the lion during confrontations with other lions and with the species' chief competitor in Africa, the spotted hyena. The presence, absence, colour, and size of the mane is associated with genetic precondition, sexual maturity, climate, and testosterone production; the rule of thumb is the darker and fuller the mane, the healthier the lion.

In Africa, lions can be found in savanna grasslands with scattered Acacia trees which serve as shade;their habitat in India is a mixture of dry savanna forest and very dry deciduous scrub forest.The habitat of lions originally spanned the southern parts of Eurasia, ranging from Greece to India, and most of Africa except the central rainforest-zone and the Sahara desert.

We thought that they were sisters.