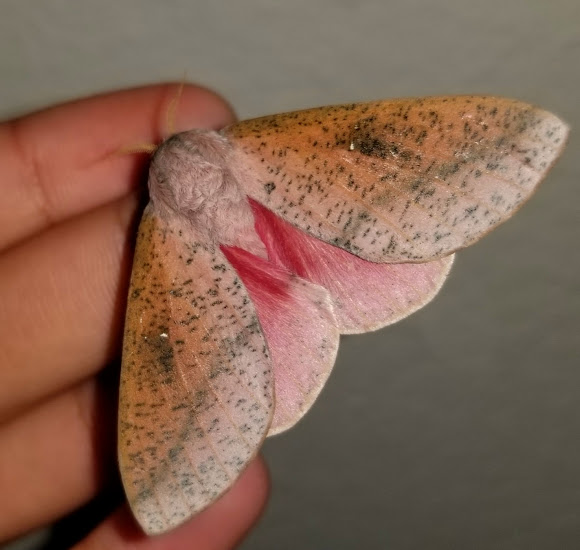 It is a medium sized moth in the family (Saturniidae), and in the genus Syssphinx. The moth is medium to large sized, (70-90 mm.). The moth has rounded orange mottled forewings with two white dots, and one faint black line on both wings. It also has white wing edges on both of the forewings. The hindwings are bright red near the inner joint area, and fades away to a light red while reaching the tornus area. The moth was a female, and has small yellow feathery antennae. The thorax and abdomen are light orange with the thorax having two black lines running down each side.

It was found in Denton co. Lake lewisville, in the small town of lake Dallas attracted to the lights of a building surrounded with lots of trees and shrubs, (woodland). The habitat needs to be a woodland with Locust trees, which are the primary host plant.

The moth used to be in the genus Sphingicampa, but was changed to Syssphinx in the past couple years. The original genus more than one hundred years ago was Dryocampa. The moth can be found in the Eastern United states the states and south east as well. The other host plant other than Locust tree is Kentucky coffee tree, (Gymnocladus dioicus). The caterpillars of this species are green, with some horns closer to the head, and can have silver patches. Here is a picture of one. https://commons.wikimedia.org/wiki/File:.... It is in the family Ceratocampinae, which includes all of these kinds of moths in the genus Syssphinx and others.

Hema Shah a year ago

Cool spotting Ornithoptera. And good notes too. Thanks for sharing.

Thank you for the comments.

Wow, that is beautiful. Thanks for sharing, Ornithoptera80.