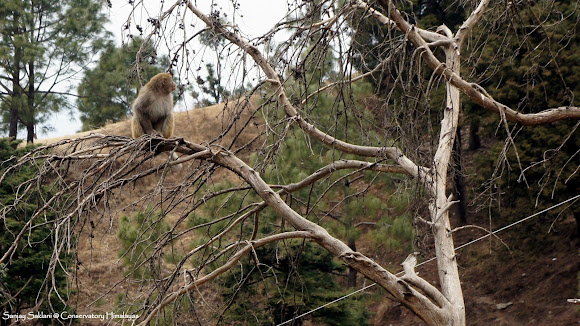 These smallish monkeys have grizzled-brown fur dorsally, with the fur on the ventrum being slightly lighter in color. The hair is short on the head. The face and buttocks of adults are red. Length varies in this species, ranging between 45 and 64 cm. The tail adds an additional 19 to 32 cm to the total length. Males are somewhat heavier than females, weighing between 6.5 and 12 kg. Females weigh a mere 5.5 kg on average.

Macaca mulatta lives in a wide range of habitats, and shows a great deal of adaptability. Some populations live in flatlands, while others, in northern India and Pakistan, live in the Himalayas at elevations up to 3,000 m. These primates are able to aclimate to a variety of climatic extremes, from the hot, dry temperatures found in deserts, to cold winter temperatures which fall to well below the freezing point. In addition to living in the wilderness, some populations of M. mulatta have become accustomed to living alongside humans. Occasionally, small groups can be found living in the densely populated urban areas of northern India. Groups of rhesus monkeys that become used to living in areas occupied by people usually search out other human-populated areas if people attempt to relocate them away from civilization.

Communication in all monkeys involves a variety of visual signals (such as body postures and facial expression), tactile communication (such as grooming, playing and fighting), vocalizations, and scent cues. The common name, rhesus monkey, is responsible for the naming of the hereditary blood antigen Rh-factor that was discovered on their red blood cells in 1940. Rh-factor is also found in humans. The mixing of Rh blood with non-Rh blood during blood transfusions or the later stages of pregnancy can result in potentially dangerous defense reactions. The name "rhesus" comes from Greek, Rhesos, the King of Thrace who assisted Priam at Troy. Audebert, the person who applied the name to the species, stated that it had no meaning.