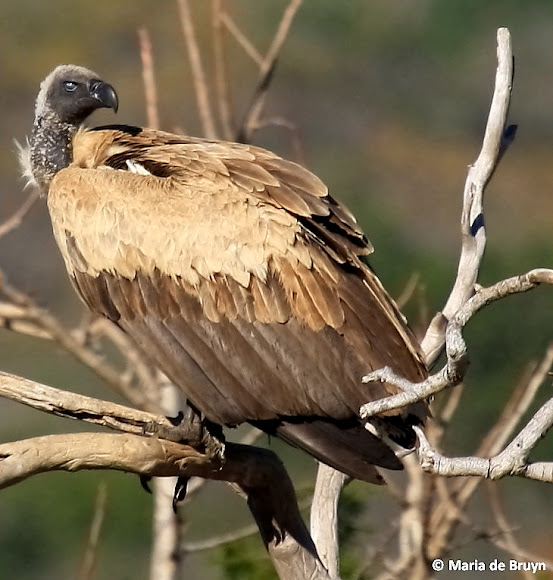 This bird is is closely related to the European griffon vulture. The adult’s whitish back contrasts with the otherwise dark plumage. Juveniles are largely dark. It weighs 4.2-7.2 kg (9.3–16 lbs), is 78-98 cm (31-39 in) long and has a wingspan of 1.96-2.25 m (6-7 ft). A scavenger, it feeds on carcasses and also scrounges scraps from human settlements. When near carcasses or at its nest, it makes a croaking sound; when disputing for food, it may make a squealing noise. They feed on soft tissues and cannot open up carcasses with thick skins. When one bird finds a freshly dead animal, it wheels in the sky to signal other vultures. The nest is a platform of sticks, lined with grass and green leaves. One egg is laid with both parents incubating for about 56 days. Both parents feed the chick, which may fledge around 4 months. In the early 1990s, the global population was estimated at 270,000. They are threatened by indirect poisoning, hunting, habitat loss, collisions and electrocution by power lines. People sometimes eat them for presumed medicinal benefits. Its conservation status was assessed as Near Threatened in the 2007 IUCN Red List. A research and monitoring project on this bird is being conducted in South Africa.