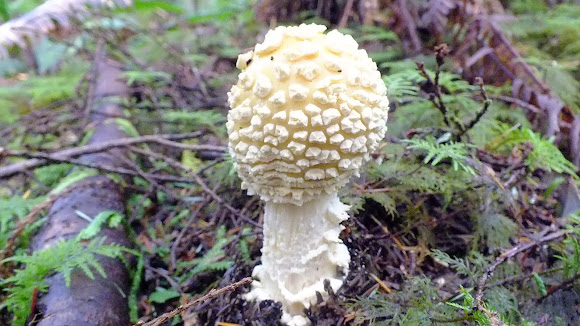 Until recently the common brown panther mushroom of the Pacific region of North America was thought to be the same as Amanita pantherina. Sequence data now makes it clear that we have a distinct, apparently endemic version of a notorious toxic mushroom. Amanita pantherinoides was first described from near Seattle Washington in 1912. Caps are 3 to 10 cm wide, at beginning spherical soon opening to convex and eventually flattening out in age, viscid when wet and young, a pale or light yellowish brown to yellow-orangish brown with usually more brown over the darker center. Cap margin is smooth when young but as the cap expands the edge develops striations or faint grooves which become more pronounced with age. Covered with smallish scattered warts or scales of white to cream colored rather cottony veil remnants which tend to be rather evenly sized and spaced, these may rub or wash off easily. The flesh of the cap is white and not staining when cut or bruised. Gills are white and crowded and free from the stem. Partial gills are truncate. Stems are 5 to 13 cm long and 0.5 to just over a cm wide, white, somewhat tapered upward and with an expanded base or bulb. There is a white ring or annulus in the upper portion of the stem which may be easily detached or destroyed by handling, the upperside of the annulus is smooth without grooves from the gills. The volva is white and remains as a cottony white thin edged collar or rim around the shoulder of the bulb. There may be a few scattered faint bands of cottony veil adhering to the stem surface above this. The flesh of the stem is whitish and the center of the stem is narrowly hollow and partially stuffed with loose white cottony tissue.

Grows from the ground near conifers and broadleaf trees. Common in spring, summer and fall when ever temperature and moisture conditions are suitable. This mushroom is usually found with conifer trees in natural areas but has adapted well to human-created urban settings where it happily thrives with a variety of non-native broadleaved trees and conifers.