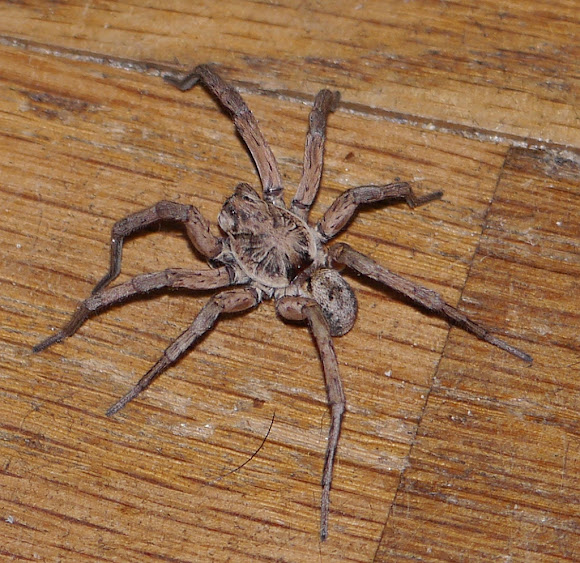 Large brown spider with markings on its back that vary depending on where it lives. They are hunting spiders (do not build webs) and will chase after they prey or lie in wait for something to walk by. though they normally do not bite humans, they can and will if they feel threatened.

This one was in my house. We tend to get several of these in our home living in the woods. They seem to come in every which way they can to get away from the cold. (We see them more often in the colder months inside). The female will carry her young on her back (literally hundreds of them) http://en.wikipedia.org/wiki/Wolf_spider...

My daughter went to remove from the bathroom by swishing at it with a towel and hundreds of babies went running off of momma's back. Though we don't believe in killing things normally, we couldn't have these tiny spiders running about. When approaching our huge wolf spiders it isn't uncommon for them to rear up and hiss! Not quite as loud as a cat hiss, but they hiss none the less. I am scared to death of these things, and have been trapped in my bathroom due to two large ones guarding my door! After screaming for my son, he kindly picked it up on a piece of cardboard and carried it outside for me. They are a very scarey looking spider (in my opinion). This photo was taken using one of my zoom lenses as I won't get within 4 foot of them!