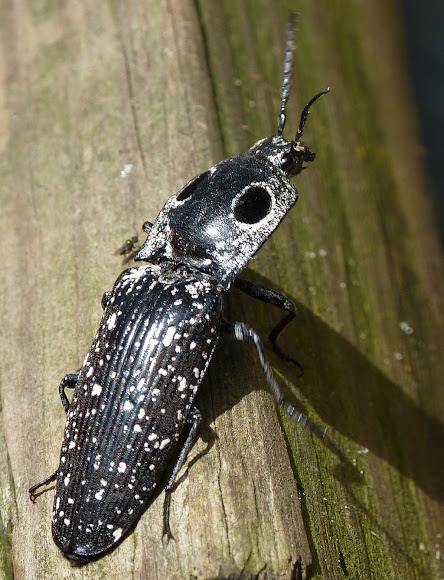 Nearly two inches long and found across the eastern U.S. as far west as Texas, this gray and black and white insect is one of the largest members of the Click Beetle Family (Elateridae); the huge eyespots on its pronotum make it one of the most easily identified. These are "false eyes," of course--likely an adaptation to scare off potential predators. The true eyes of the Eyed Click Beetle are much smaller and located at the bases of its heavily sawtoothed antennae

There are about 9300 known species worldwide, and 965 valid species in North America. In and around woods, grasses and any other place you may find a beetle lurking.

Despite their differences in appearance, all Click Beetles have a startling behavior that demonstrates how they got their primary name--as well as the alternate epithets of "snapping beetle," "skipjack," and "spring beetle." When placed on its back--or when grabbed by an insectivore--a Click Beetle bends its head and prothorax backward and then straightens out suddenly with a snapping motion; this results in an audible click and launches the beetle several inches into the air. http://en.wikipedia.org/wiki/Click_beetl...