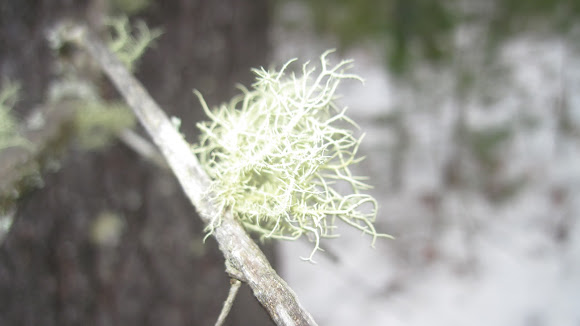 January 18, 2012 we went outside to search for animal tracks and lichen. When we went out side it was windy and sunny but not warm. The snow was approximately 15 cm deep with a thin crunchy crust on top of it. It was about 10:30AM. It was hard to find any animal tracks because it rained last night. The temperature was 3º with wind speeds of about 28.96kph gusting up to 41.84kph. We found Lichen on pine trees and oak trees. The lichens we found were pretty high up on the trees and not down toward the base. The lichens we found were green colored and white colored. I found a picture that look like mine. It is in Maine and I believe it is called Evernia. The lichen is fuzzy like mine and another one called Bearded lichen. It looks a lot like Evernia, both are stringy like mine and the same color.my lichen look like light green grass on the tree and it is realy look like it. kingdom Kingdom: Fungi Phylum: Ascomycota Class: Lecanoromycetes Order: Lecanorales Family: Parmeliaceae Genus: Evernia Species: E. prunastri Binomial name Evernia prunastri (L.) Ach.

Awesome field notes. I also like the way your pictures look. They look very clear. And your field notes are very specific with the wind speed and the gusts of wind. I think you did a very good job of trying to find your lichen and making your field notes.