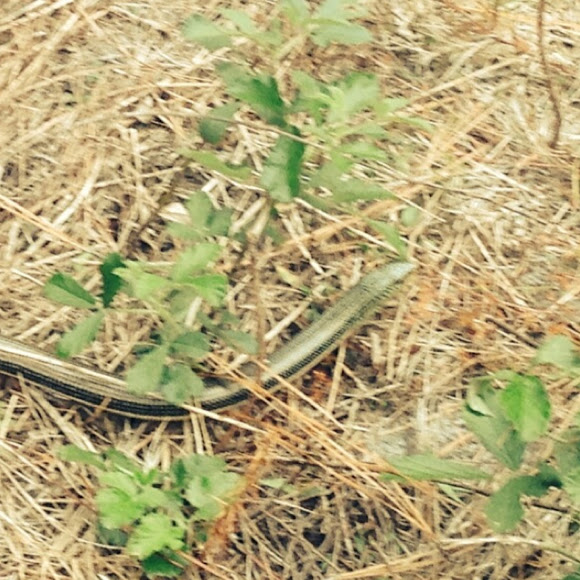 Great Camo! Almost stepped on him. Black stripe runs down the side. All four species of glass lizards have dark stripes on the back and sides. The basic ground colors are light brown, tan, yellowish, or blackish. Large adult Eastern Glass Lizards are sometimes greenish in color. 46 - 107 cm (18.1 - 42.1 in) in total length. Glass lizards are snake-like lizards without legs. They have moveable eyelids and external ear openings and snakes do not. The head and body generally account for only one third the total length of the lizard, while the tail makes up two-thirds the length of the animal. There is a distinct groove along each side of the body which permits expansion of the body when the lizard is distended with food or eggs. The common name of these lizards arises because they have a very long tail that breaks off more easily than that of other lizards. It may break off when the animal is captured or handly roughly. A new, shorter tail will grow in its place.

The Eastern Glass Lizard is found in the upper and lower Coastal Plain.

Yea, you would have been looking at snakes for a long time haha :)

Right on the money! I've looked at pages and pages of snakes to identify, didn't even think of a glass lizard. Thank you!

It's one of the species of Glass Lizards. There are 4 in your area, so please confirm this is the correct one!