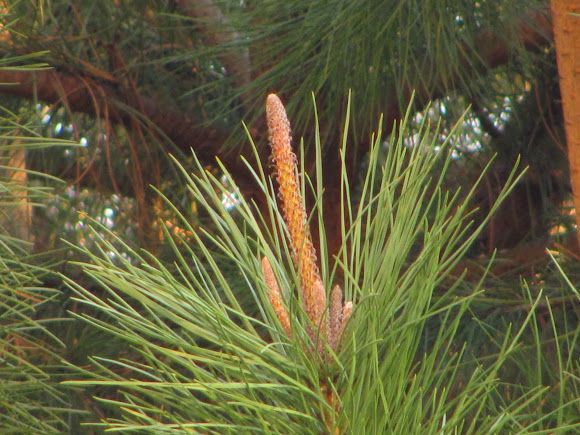 The Stone pine is a coniferous evergreen tree growing to 12–20 metres (39–66 ft) in height, and can exceed 25 metres (82 ft) height. In youth, it is a bushy globe, in mid-age an umbrella canopy on a thick trunk, and, in maturity, a broad and flat crown 40–60 metres (130–200 ft) in width. The bark is thick, red-brown and deeply fissured into broad vertical plates. Foliage The flexible mid-green leaves are needle-like, in bundles of two, and are 10–20 centimetres (3.9–7.9 in) long (exceptionally up to 30 centimetres (12 in)). Young trees up to 5–10 years old bear juvenile leaves, which are very different, single (not paired), 2–4 centimetres (0.79–1.6 in) long, glaucous blue-green; the adult leaves appear mixed with juvenile leaves from the fourth or fifth year on, replacing it fully by around the tenth year. Juvenile leaves are also produced in regrowth following injury, such as a broken shoot, on older trees. Cones The cones are broad, ovoid, 8–15 centimetres (3.1–5.9 in) long, and take 36 months to mature, longer than any other pine. The seeds (pine nuts, piñones, pinhões, pinoli, or pignons) are large, 2 centimetres (0.79 in) long, and pale brown with a powdery black coating that rubs off easily, and have a rudimentary 4–8 millimetres (0.16–0.31 in) wing that falls off very easily. The wing is ineffective for wind dispersal, and the seeds are animal-dispersed, originally mainly by the azure-winged magpie, but in recent history, very largely by humans

The prehistoric range of Pinus pinea included North Africa in the Sahara Desert and Maghreb regions during a more humid climate period, in present day Morocco, Algeria, Tunisia, and Libya. Its contemporary natural range is in the Mediterranean forests, woodlands, and scrub biome ecoregions and countries, including: Southern Europe The Iberian conifer forests ecoregion of the Iberian Peninsula in Spain and Portugal; the Italian sclerophyllous and semideciduous forests ecoregion in France and Italy; the Tyrrhenian-Adriatic sclerophyllous and mixed forests ecoregion of southern Italy, Sicily, and Sardinia; the Illyrian deciduous forests of the eastern coast of the Ionian and Adriatic Seas in Croatia and Albania; and the Aegean and Western Turkey sclerophyllous and mixed forests ecoregion of the southern Balkan Peninsula in Greece. In Greece, although rare[2], an extensive Stone Pine forest exists in western Peloponnese at Strofylia[3] on the peninsula separating the Kalogria Lagoon from the Mediterranean Sea. This coastal forest is at least 8 miles long, with dense and tall stands of Pinus pinea mixed with Pinus halepensis.[4] Currently, Pinus halepensis is outcompeting Stone Pines in many locations of the forest.[5] Another location in Greece is at Koukounaries on the northern Aegean island of Skiathos at the southwest corner of the island. This is a half a mile long dense stand of Stone and Aleppo Pines that lies between a lagoon and the Aegean Sea.[6] A fine-textured sand beach lies between the Koukounaries forest and the sea. Western Asia In Western Asia, the Eastern Mediterranean conifer-sclerophyllous-broadleaf forests ecoregion in Turkey; and the Southern Anatolian montane conifer and deciduous forests ecoregion in Lebanon, Syria, and northern Israel northern Africa The Mediterranean woodlands and forests ecoregion of North Africa, in Morocco and Algeria

Pinus pinea has been cultivated extensively for at least 6,000 years for the edible pine nuts. These have been trade items since early historic times. It has been cultivated throughout the Mediterranean region for so long that it has naturalized, and is often considered native beyond its natural range Spotted in residencial area in the city.

Thanks Seema,i've been checking and i think is a pinus pinea, Stone Pine,http://www.scionresearch.com/keys/Pinus/key/Key-to-cultivated-pines/Media/Images/Factsheets/Pinus%20pinea%20bud1-A11591H.jpg

nice series....can it be Aleppo pine?