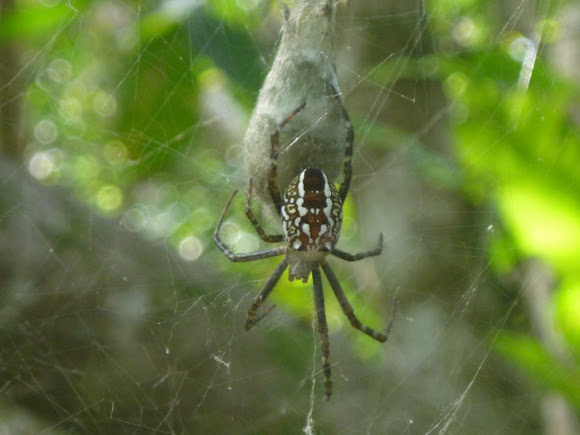 A web weaving spider related to the orb spider. The female, shown here guarding the egg casing inhabits the centre of the web mass and the male, third photo is found on the outer edges. The female is distinguishable as a tent web spider by her two white tubercles on her abdomen. The female's body has an intricate symmetrical brown, black and white pattern with some green tinges around the side of the abdomen. Legs are patterned in these colours, marked in horizontal bands. The main body is large and bulbous and easily spotted from a distance. The male is very delicate by comparison and appears translucent throughout his whole body, legs included, but in similar colouration. Overall diameter is much the same but body size would be around 25%, making it harder to spot.

Webs can be found all over the island, predominantly in bush but one notable one was spotted in the canopy above the road, spun from one side to the other in clear air. Often spotted with the centre of the web about 1.5m off the ground.

Very easy to spot if you're looking for them. They are not keen on moving from their chosen spots on the web.

Yes humans went there too. Possibly hitched with them.

Yes amazing, would presume possibly wind assisted or hitched a ride at some point!

This spider has even managed to conquer small islands in vast oceans. Amazing!