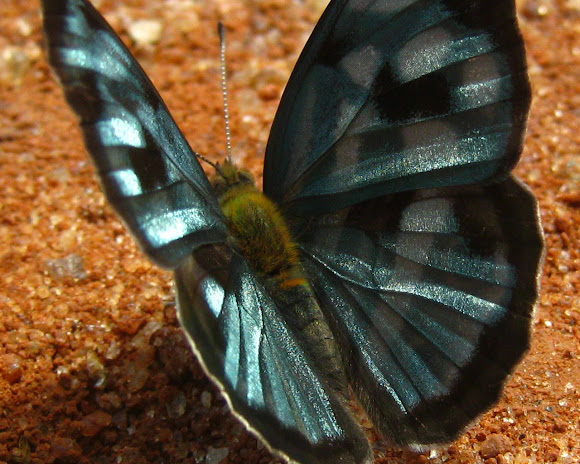 "Most Dynamine species have highly reflective bluish or greenish uppersides, often in combination with a dark apex and borders. Dynamine postverta is easily recognised by the group of 4 squarish dark spots on each forewing. The underside is similar to that of other Dynamine species, being white, marked with narrow bands of orange. In common with several other species there is also a pair of blue-centred submarginal ocelli on the underside hindwings. Dynamine postverta ( previously known as D. mylitta ) is the commonest and most widespread member of the genus, being found throughout most tropical and subtropical areas of central and South America, from Mexico south to Argentina and Paraguay." (http://www.learnaboutbutterflies.com)

This species is found in a wide variety of habitats including primary rainforest, humid deciduous woodlands, scrubby grassland, farmland etc; at altitudes between sea level and about 900m.

Hey, I missed this SOTD! Congrats! NIce one!

What a beauty, congrats, Rubens!

Perfect shot! the focus and the depth of field are perfect, colours are clean, just fantastic!

Great spotting... They are such very small so very tough to spot them easily...!!

OMG! one of the most gorgeous butterflies I have seen, thanks for sharing this amazing spotting, well deserved SOTD

Congratulations Rubens! This jewel was selected as Spotting of the Day!

"The beautifully iridescent Four-spotted Sailors are very active in hot sunny conditions, when they can be seen flying rapidly in zig-zag fashion, investigating along forest tracks."

Wow that's an amazing spotting! Such a gorgeous butterfly!

The wings are so beautiful!!