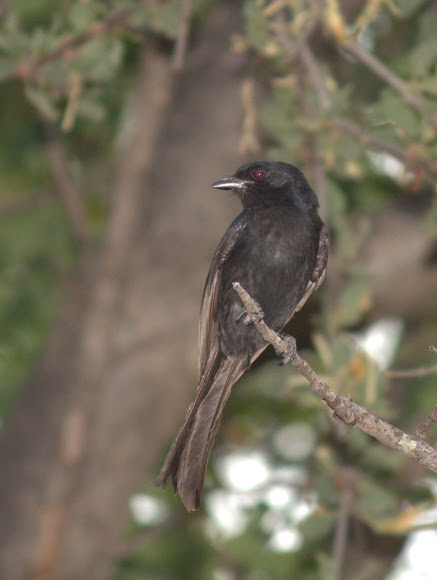 Very aggressive mother defending her territory around the nest. My wife was dive bombed from behind and it made actual contact on her head as she came out of the ablution block. The nest with three chicks (photo 5) is in a tree just outside the door.

The Square-tailed Drongo (Dicrurus ludwigii) is a drongo named after Baron von Ludwig. The drongos are small passerine birds of the Old World tropics. They were previously classed as the family Dicruridae, but that has been much enlarged to include a number of largely Australasian groups, such as the Australasian fantails, monarchs and paradise flycatchers. The Square-tailed Drongo is a common resident breeder in much of Africa south of the Sahara. These insect-eating birds are usually found in forests or dense bush. Two to three eggs are laid in a cup nest in a fork high in a tree. These are aggressive and fearless birds, given their small size, at 19 cm, and will attack much larger species if their nest or young are threatened. The male is mainly glossy black, although the wings are duller. The female is similar but less glossy. The bill is black and heavy, and the eye is red. This species is similar to the Fork-tailed Drongo, but is smaller, and the shorter tail lacks the deep fork which gives the latter species its name. Fork-tailed is also typically found in more open habitat. The Square-tailed Drongo has short legs and sits very upright whilst perched prominently, like a shrike. It flycatches or take prey from the ground. The call is a harsh cherit-cherit.