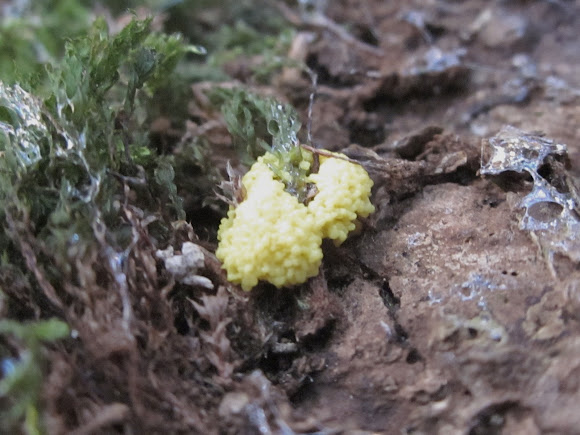 They're not mushrooms--in fact, they're not even fungi--but they do wind up on a mushroomer's radar screen with some frequency, usually as "sporangia" (see below). Is it a puffball? Is it a sickening mass of jellylike globules? Why am I taking a picture of this? -----. . . and so on. Obviously, if you want good information about slime molds, you'll need to go elsewhere on the Internet. I just checked for "SlimeMoldExpert.Com" and got nothing--but see the links at the bottom of this page. If you are a slime mold expert, please try not to laugh as I stumble through a brief description of the slime mold life cycle. ---Plasmodium:This stage is the creepy stage. Like something out of a B-movie, the slime mold plasmodium is a mass of glistening veinlike material that creeps across dead leaves or wood at the rate of as much as an inch per hour, growing, eating, and probably doing other nasty things we don't even want to know about. There are no cell walls in the plasmodium, and its motion is the result of protoplasm flowing rhythmically through the organism. ( http://www.mushroomexpert.com/myxomycete... )

Scientific name: Fuligo septica (L.) Wigg. Derivation of name: Synonyms: Common name(s): Scrambled-egg slime. Phylum: Myxomycota Order: Physarales Family: Physaraceae Occurrence on wood substrate: Occurring as slimy to crust-like sheets or cushion-like iregular masses on stumps, logs, living plants, and wood mulches in landscapes; May through October. Dimensions: Masses are 2.5 to 20 cm long, almost as wide, and 1-3 cm thick. Description: This slime mold first appears as a white to yellow slimy mass with dimensions as given. The "flesh" transforms into a crusty, cake-like mass of darker and variable color. The brittle crust easily breaks away to reveal a dull-black spore mass. Edibility: Inedible. Comments: Although many slime mold species fruit on wood they do not form a penetrating and absorptive mass of hyphae in the wood substrate. Rather, slime molds form structures called plasmodia which are naked (i.e., without cell walls) masses of protoplasm which can move and engulf particles of food in an amoeboid manner. Slime mold plasmodia creep about over the surfaces of materials, engulfing bacteria, spores of fungi and plants, protozoa, and particles of nonliving organic matter. At some point, plasmodia convert into spore-bearing structures. In Fuligo, the plasmodium converts into a cushion-shaped mass of spores enclosed by an outer wall called a peridium. This structure is called an aethalium (plural: aethalia). Fuligo septica produces the largest spore-producing structure of any known slime mold ( http://www.messiah.edu/Oakes/fungi_on_wo... )

Slime molds do not fit at all into the kingdom Fungi. They have been traditionally studied by mycologists because their small, delicate fruiting bodies tend to be fungal in appearance. Most slime mold fruiting bodies are really quite beautiful. In this picture A is Lycogala epidendrum, B is Comatricha typhoides, C is Badhamia utricularia, D is Dictydium cancellatum. Slime molds are often found on old well-rotted logs, because there they can find the moisture and bacteria required for survival. The fruiting bodies produce spores, which can germinate to form myxamoebae or flagellated swarm cells. These later fuse to form the plasmodium, which later forms the fruiting body. Most of the fruiting bodies are only a millimeter or two in height so it does take some searching to find them. However, it's well worth the time and effort, especially if you have a hand lens or a dissecting microscope. Their beauty is amazing. I have some more online images of slime molds here. For more information on slime molds including a world-wide directory of people who study slime molds, please visit MyxoWeb, created and maintained by Denise Binion. You can find a picture of a Fuligo septica plasmodium by Bill Roody there also ( http://botit.botany.wisc.edu/toms_fungi/... )

i have better to do--you're right ^^ (They're not mushrooms--in fact, they're not even fungi"
"it is maybe intressting, that this are not my words, thats words of a well known mycologist" By something like this : (and btw, fungus is the latin word for mushrooms - it's one and the same ) do i have to give you more advise!! but discusion close, we all saw bambi: "when you dont have anything nice to say, keep quiet!"

Well, you can educate me in what ever you know something about.
I am the last who won't take advises from an amateur even in my field of professsion - anything else would be ignorant.
Maybe you should try that, too.

i categorize them under the category: "mycology" as explained before!! "A fungus ( /ˈfʌŋɡəs/; plural fungi or funguses) is a member of a large group of eukaryotic organisms that includes microorganisms such as yeasts and molds (British English: moulds), as well as the more familiar mushrooms. " --so now tell me again, that mushroom equals fungi, mushroom call we commonly those fungi we could eat, fungi are all - includet molds, (spinellus fusiger) , please don't try to educate me on this area, when it seems that you don't see a dfferents between a. mellea or a. solidipes. It's the same as: when i try to tell you which lense you should need for your art.!!

Are you kidding me, Alex?
"They're not mushrooms--in fact, they're not even fungi"
But you categorize them as such? Funny.
(and btw, fungus is the latin word for mushrooms - it's one and the same)