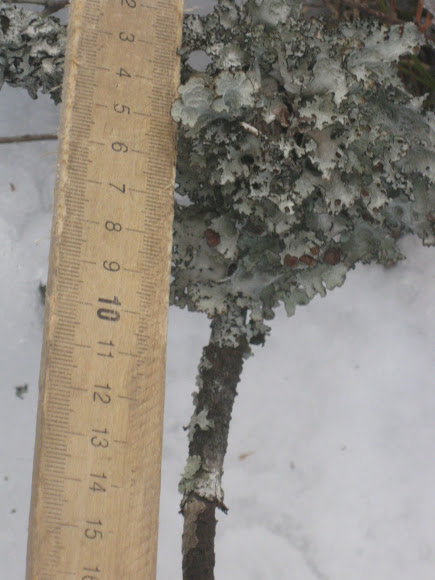 My class and I went outside in January to look for lichen. My group and I found found a bunch of lichen in the woods by our school. We found some lichen up high on a tree and some low on a tree some of them were on the branches of the tree, we also found some on a bush. The temperature was 3 degrees celsius. There was snow on the ground. The first lichen we found was green and other we found were gray, some of the thallus’s were foliose and some weren’t. We found one or two different lichen on the ground but most of them were either on a tree or a branch. It was about 10:30 in the morning when we went out. Some of the lichen we measured were 9 1/2 cm and some were 5 cm. We went out on the 18th of January. It was very windy and cold out. The lichen we found that weren’t fuzzy were either squamulose or were just rough in texture. I believe that the lichen my group and I found is the common greenshield lichen or flavoparmelia carperata.

On a tree branch in the woods.

Nice spotting, and sounds like you had a good time looking for lichens :)