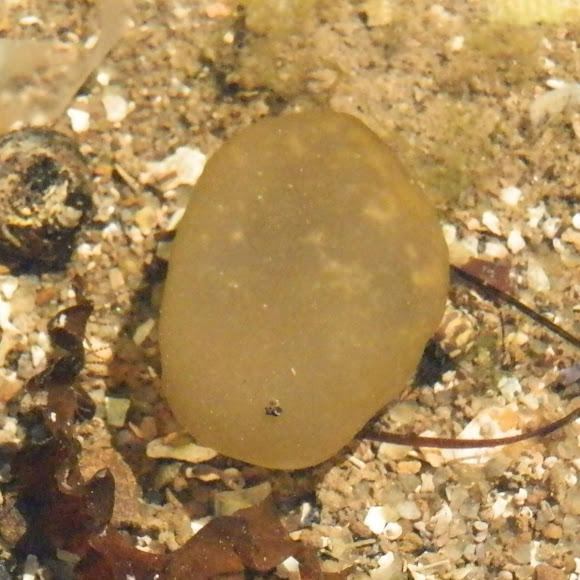 This is a yellowish-green thin-walled algae with a broad semi spherical thallus (algal body). Pic 1 shows the upper surface of this algae and Pic #2 a torn lower side. These algae are supposedly mature plants that are empty and torn off their "moorings". They look like shower caps with puckered edges. Pic #2 -quality poor - could not get a better shot.

Rock pools in tidal zone. These were free floating in rock pools. This is actually a brown algae occurring naturally in the Pacific Ocean. It was introduced into European seas and around the British Isles with oyster catches. It is now reportedly seen in all oceans including the southern Australian coast.

These spherical algae are usually epiphytic on other algae or grow on oysters or mussels attaching themselves with filamentous growths. The sphere is inflated with gas and when there is enough gas, the algae floats away with the oyster that it is attached to - hence the name "oyster thief" http://www.marlin.ac.uk/speciesinformati...

You're welcome CindyBK. You see these green bulbous things floating around and then read about them being Oyster thieves - got me all interested..

It's nice when someone gets creative with the name! Thanks for the introduction of this criminal :)

Thanks Martin. I've had a look at all my spottings - they seem so drab and colourless but somehow there are aspects to them that I find very interesting. This one made me smile -especially "the oyster thief" bit..

Curiouser and curiouser. Who would give this a second look Leuba. You turn the most mundane into the most interesting.

Amazing. Who would have thought something so simple could turn out so interesting. A plant that steals oysters...