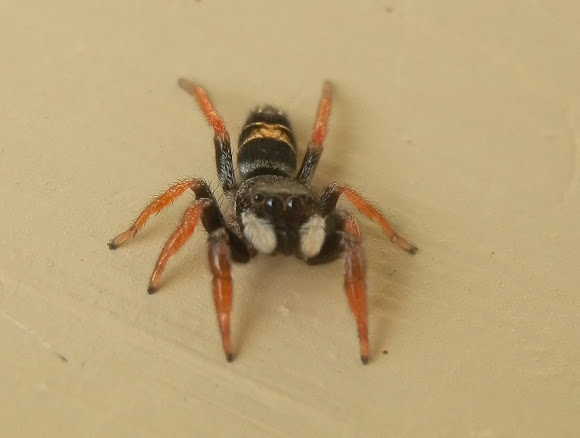 This attractive jumping spider was just a little over 5 mm long. The body was black with a banded yellow pattern on the abdomen. Legs were brown and pedipalps were covered with white hairs.

Spotted in the outer wall -suburban house. Said to be common and widespread along coastal mainland Australia and Tasmania.

The spider is known to creep about slowly and move its cephalothorax from side to side, keeping its abdomen stationary ( pics 2 & 3). Pedipalps were never still especially as my camera got a little too close.
The male of the species is smaller with a narrower abdomen.
Was called Ocrisiona jovialis but is now Apricia jovialis.
Family: Salticidae

Thanks for your comments everyone - she was a cutie with chubby front legs.

Very cool find Leuba,congrats and thanks for sharing

Good shots Leuba. I could hardly see it.