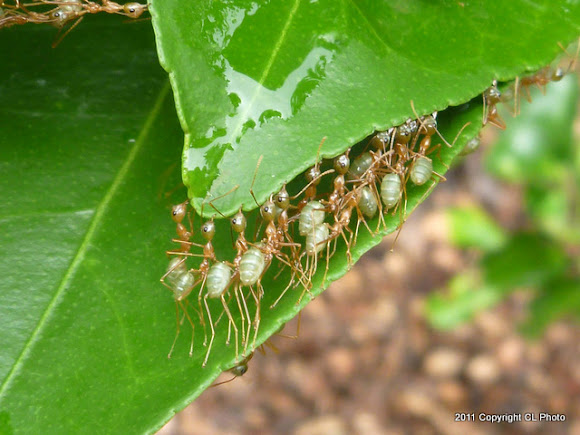 The Green Ant is used as bush medicine. The nest is taken from the tree rubbed together place in a bucket of water for only a short time. The water is strained into a clean bowl. This green ant medicine is drunk if you have like the flu.

The green tree ant found in Northern Australia is a type of weaver ant found in many parts of the world. The Australian species (Oecophylla smaragdina) is commonly referred to as either a green tree ant or weaver ant. They are called weaver ants because they weave a nest together out of leaves. In Australia they are only found in the Northern regions. They occur in forested areas both in Northern Western Australia and also in the Northern Territory and Queensland. In Queensland they spread down the coastal fringe as far south as Rockhampton, and can often be found in fruit orchards.

Thanks VivBraznell It is so amazing to watch the green ant working together..
@ Simon.. thanks for inviting me. I have joint you mission with my ant spottings...

Hi Christiane. Your spotting and photographs are both amazing. I'm an ant lover and I'm trying to gather a collection of the species variety in my mission Ant Empire, unfortunately I don't come across many varieties myself. Here's the link for the mission http://www.projectnoah.org/missions/1255... hope you join and happy spotting for the future.

Teamwork at it's finest. It's truly fascinating watching ants work together, could teach us humans a thing or two. Thanks you for the link

Thanks KarenL.. I watched them build their new nest for 2 days.. It is amazing how the know what to do.

Superb! Should be a Spotting of the Day.

Great spot, it demonstrates the co-operation displayed by these tiny workers beautifully

Thanks for sharing this wonder.

Thanks.. Gerardo.. These are amazing animals..