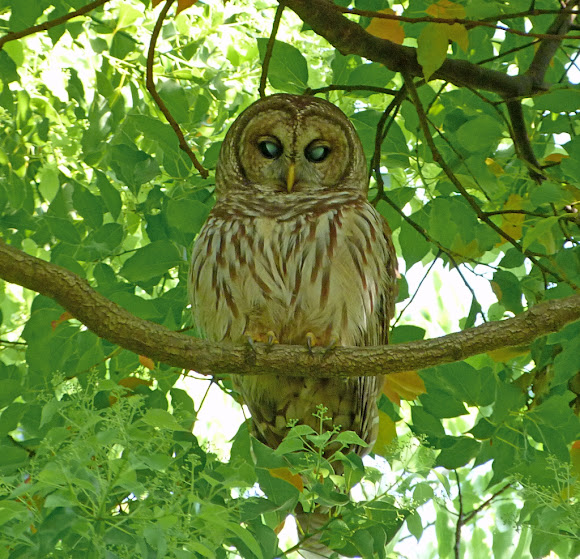 Large owl. Head round with no ear tufts. Eyes dark. Underparts whitish with dark streaks. Note- the eyes are actually Black, I captured the first photo just as he was blinking so the light areas that you are seeing are actually his eyelids! the last photo was taken while he slept :)

Interesting Fact - I was able to locate this owl and its mate several times during the day - only due to the fact that when a train comes by, they let out one of their hoots! Not sure if they do this everywhere, but thought it interesting... So far the only owl I have had the pleasure of seeing and photographing.. A large owl of extensive woodlands, the Barred Owl is familiar for its distinctive "who-cooks-for-you, who-cooks-for-you-all" hooting.

WOW Thanks ChristyHolland, I knew it was the eyelid, but had no idea they can still see through them! Very interesting.
Thank you dxmgs1

@Birding for fun - you actually see the closed nictitating membrane (third eyelid) - it's used to protect the eye but the owl can still see out of it.

Great series!! I love your story...either they're courting the train or they're defending their territory (probably the latter!). ;-)

Thank you birding for fun :)

Wow. The first photo is very interesting. I like how the light got reflected in it's eyes.