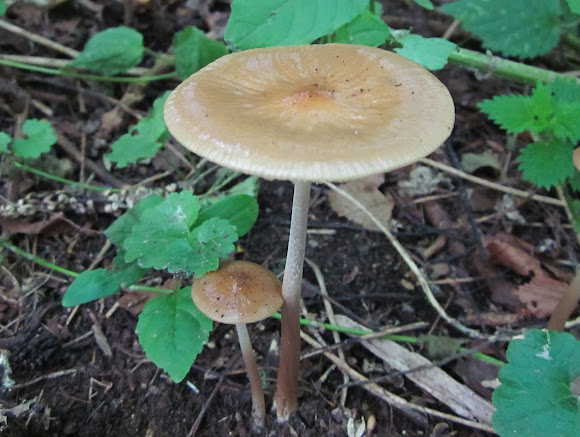 Xerula species are frequently encountered around stumps and dead trees--or in urban areas where trees have been removed. They are saprobes that subsist on the wood of dead or dying tree roots, but the mushrooms almost always appear to be "terrestrial," without demonstrating a clear connection to buried wood ( http://www.mushroomexpert.com/xerula.htm... )----The cap) is medium to large, flat, grayish or yellowish brown and streaked, with a central hump. The surface of the cap is sticky or slimy when moist, with the underside displaying wide white gills, or Lamella. The brittle stalk tapers at both ends and is nearly white above to brown below the soil

------------------Medicinal properties------------- Antihypertensive effects=== --The molecule oudenone is a fungal metabolite that was first isolated from the culture filtrate of X. radicata (as Oudemansiella radicata) (Umezawa et al., 1970). Shortly after, the structure and synthesis of oudenone were reported (Ohno et al., 1971). Oudenone is a strong inhibitor of catecholamine biosynthesis - specifically, it inhibits the enzymes phenylalanine and tyrosine hydroxylase. The physiological effect of this enzyme inhibition is the reduction of blood pressure, the inhibition of tyrosine hydroxylase in the adrenal glands in vivo, as well as the reduction of tissue catecholamine levels in the adrenal glands, heart and brain in spontaneously hypertensive rats (Nagatsu et al., 1971). The biosynthesis and cyclization mechanism of oudenone have been elaborated using feeding experiments using 13C and 2H labeled precursors and NMR analysis (Tsantrizos et al., 1995; Tsantrizos et al., 1999). Various synthetic schemes have been proposed for the molecule (Tsujikawa and Hayashi, 1977; Bates and Farina, 1985; Flynn et al., 1995). ----The antihypertensive molecule (S)-2-[4,5-dihydro-5-propyl-2- (3H)-furylidene]- 1,3-cyclopentanedione, commonly known as oudenone. Antifungal activity=== -----X. radicata has been shown to contain an antibiotic named oudemansin X (shown below), which lacked antibacterial activity against various organisms tested, but showed good antifungal activity (Anke et al., 1990). Later synthetic work described the chiral total synthesis of three kinds of oudemansin X, (-)-1, (+)-1 and (+)-1; like the parent molecule, the synthetic oudemansin X (-)-1 had strong antifungal activity against several molds and yeasts. (Umezawa et al., 1995). The lack of antibacterial activity corroborates the findings of Bianco et al. (1996). ----The antifungal metabolite E-β-methoxyacrylate oudemansin X. --Antitumor effects=== -----Polysaccharides extracted from the mycelial culture of X. radicata and administered intraperitoneally into white mice at a dosage of 300 mg/kg inhibited the growth of Sarcoma 180 and Ehrlich solid cancers by 100% and 90%, respectively (Ohtsuka et al., 1973). ( http://healing-mushrooms.net/archives/xe... )

i'm not that convinced, i didn't saw any residu of an egg, at none of the few specimen , which where there. I just recently found lots of amanita fulva, and those had almost all a eggshell,
Sadly didn't i picked one xerula back then to confirm with the "deep root".
But i also, keep that in mind.
Feel free to correct, where you think it's needed!!! :)

Can I be free to correct? I believe this is Amanita fulva. Looking at the stripes on the margine of the cap aswell as the color, it does not compare to the rather rugulous cap of the Xerula radicata.