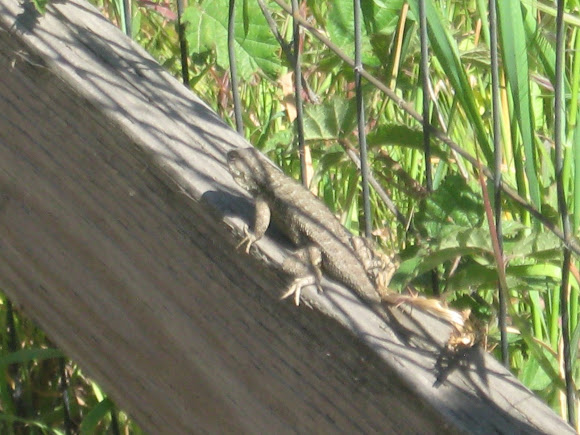 A fairly small lizard with keeled and pointed dorsal scales of equal size on the back, sides, and belly. Scales on the backs of the thighs are mostly keeled, and abruptly smaller.

Although California is the heart of the range of this lizard, it is also found in eastern and southwestern Oregon (some populations are found even north of Seattle, WA), as well as in the Columbia River Gorge, southwestern Idaho, Nevada, western Utah, northwestern Baja California, Arizona, and some of the islands off the coast of both California and Baja California. The western fence lizard occupies a variety of habitats. It is found in grassland, broken chaparral, sagebrush, woodland, coniferous forest, and farmland, and occupies elevations from sea level to 10,800 ft. They generally avoid the harsh desert.

Along the path heading towards wilder ranch state park I spotted this little guy climbing up the fence bordering the trail.

Thank you for the ID suggestion StirredMocha :)