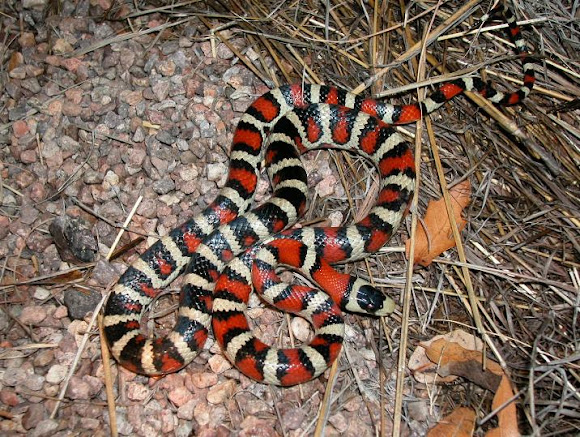 A medium-sized (up to 1,088 mm or 43" in total length) snake with alternating red, black, and white bands. The white bands are bordered by black bands. The black bands become wider mid-dorsally and often merge together at the midline of the back thereby "bridging" across the red bands. The black bands become more narrow on the lower sides and often disappear before reaching the belly. The head is noticeably wider than the neck and the snout is white or cream colored. The pupils are round and the scales are smooth and shiny. Its light colored snout distinguishes this snake from the similar looking milksnake. (from http://www.reptilesofaz.org)

This snake occupies communities ranging from Interior Chaparral up through the highest elevations of Petran Montane Conifer Forest. It is often found on heavily wooded, rocky slopes or in steep canyon bottoms with abundant leaf-litter, fallen logs, and rocks. It also inhabits relatively open rolling hills and grasslands in transition zones.

I found this kingsnake on the evening of the same day that my zoo hatched the species for the first time in my career. I took care of the breeding pair so it was extra special for me. It was just a little bit crummy that I wasn't there to see them hatch, but seeing one in the wild was a thrill.

I found my first one in the Chiricahua Mountains and this one was actually just north of Nogales, AZ. That was the closest town to use for the map. :-) Get out to Arizona; so many cool herps to find!

He's a beautiful guy! One day I'll find one too hopefully :)

wow, this one is extremely beautiful and colorful snake. Nice pics...