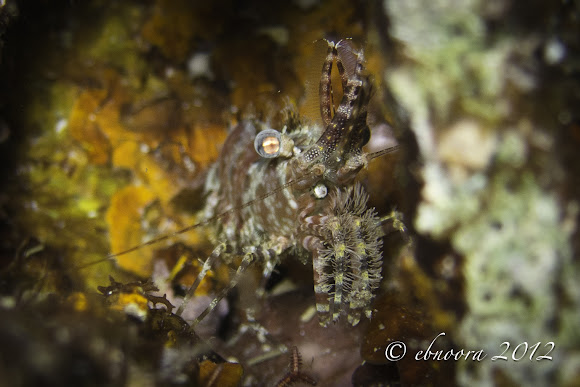 "The Common Marble Shrimp, also known as the Saron Shrimp, was first described in scientific literature in 1811. During the day it is brown with green spots. These green spots will have variable amounts of white speckling. The legs have darker brown bands on a brown background with alternating white speckled bands. Tufts of cirri (feathery appendages) are found decorating the back of the males, and their first pair of walking legs are elongated. The Common Marble Shrimp is nocturnal, and at night, the color of its body turns primarily red, which helps it blend into the shadows of the twilight." Source - http://www.peteducation.com/article.cfm?...

Spotted during a night dive at Dive and Trek house reef