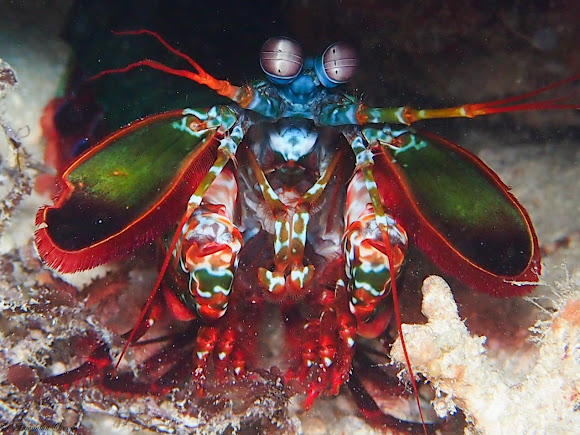 The mantis shrimp has such good eyes it can perceive both polarized light and hyperspectral colour vision. Their eyes (both mounted on mobile stalks and constantly moving about independently of each other) are similarly variably coloured and are considered to be the most complex eyes in the animal kingdom. During mating rituals, mantis shrimp actively fluoresce, and the wavelength of this fluorescence matches the wavelengths detected by their eye pigments.

They are a very cryptic species - spending almost all their time in burrows. Occasionally you see one out and about, relocating or hunting. When I ran into this guy, he stared for a while, and ran for cover under some coral.

Part of the order Stomatopoda - they are not mantids nor shrimp. They can learn and remember well, and are able to recognise individual neighbours with whom they frequently interact. They can recognise them by visual signs and even by individual smell. Many have developed complex social behaviour to defend their space from rivals.

Quite the opposite...but I think it's still the women who get to choose! ;)

Exactly. Females usually have the "power" to choose their mates, so she doesn't have to put all that energy into decorating herself. He on the other hand has to impress. Just the opposite it humans it seems sometimes!

I see. Just like a lot of other animals, no?

Thanks everyone - Blogie, the males are much more colourful - the females look drab in comparison!

What makes it male, Sam?

Thanks guys - though it's not technically a shrimp, it's a member of a different Order!