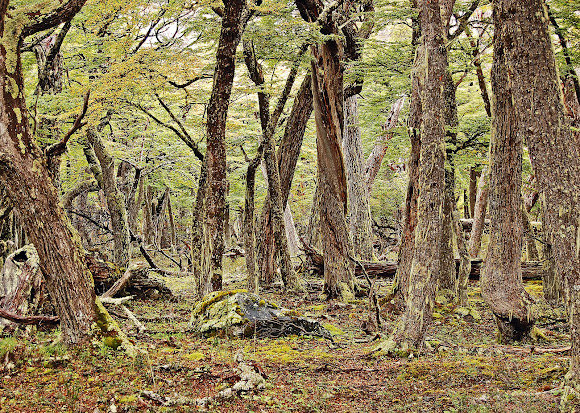 Southern beeches are native to the Southern Hemisphere, and are found in southern South America (Chile, Argentina) and Australasia (east and southeast Australia, Tasmania, New Zealand, New Guinea and New Caledonia). While previously part of the family Fagaceae, they now have a family of their own, the Nothofagaceae.

These trees were found near the Onelli Glacier, on Lago Argentino in Los Glaciares National Park, Patagonia, Argentina. The Onelli Bay is surrounded by moss and lichen-covered primeval forest.

Its distribution around the southern Pacific Rim suggests that the dissemination of the genus Nothofagus dates to the time when Antarctica, Australia and South America were connected as a supercontinent called Gondwana

How did I miss this.. !! Thanks Daniele.

That is so cool, Daniele. Apparently there are 35 species of Nothofagus, all in the Southern Hemisphere. There's something very majestic and spiritual about these trees. I never made it to Patagonia. Lucky you for having seen these and been there :-)

Thank you DedesDescodes! It was indeed magical... these trees are surrounded by water, icebergs and glaciers.

Thanks for your comment Clive. I haven't had the chance to see the South Island of New Zealand. Interesting observation as both places are at about the same latitude. This shot was taken at the end of summer when this place is at its warmest and driest. Still, it was actually raining when I took this picture. The forest is almost at sea level (alt. ~ 200m).

Thanks Lars! This place is incredible, surrounded by water and glaciers going down to almost sea level...