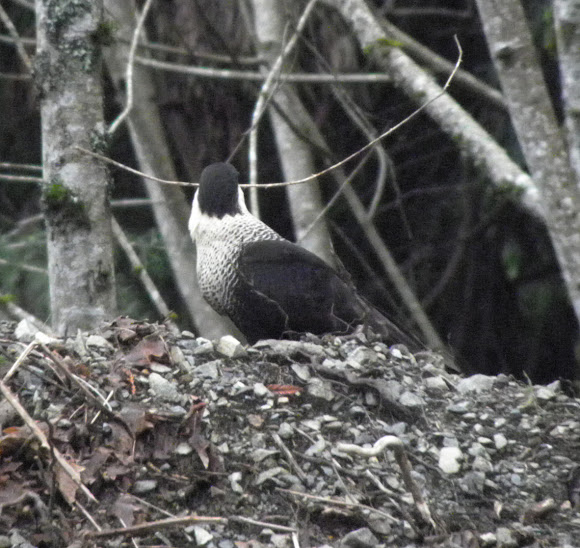 hwy 197 near 101, at a gravel station/road cut, near the Smith River - about 4 miles from town and only about 6 miles from the Oregon Border

1st, 2nd (and 3rd)photos, note the twig in his beak which appeared to be an offering to the Raven. I took a total of 20 pictures, but these are the best of the lot According to one birding site, he has lived in the Crescent city area for 4 years now

Then, yes, we've both seen the same bird. Last report had him at Cape arago light

I am located in Fort Dick, CA very near the Smith River Dr. Fine Bridge.

Where are you located? And if in Oregon or N California, also report to OBOL@freelists.org

He was last seen up near Cape Blanco lighthouse. Has been on the move back and forth between S oregon Coast region and smith river for a few months now

Pretty sure I spotted this bird in my yard on Sunday, April 20th. It was perched on a fence post eating a dead starling.

I did get another sighting awhile back http://www.projectnoah.org/spottings/124...

We went down to try and see him again. We failed to find him(although I think I may have seen him way off in the distance). The local birders reported seeing him everyday last week... so that means the yolo-solano cnty bird is a second one. Pretty exciting, really

I will keep you informed!!

I'd like to see the pictures posted to the yahoo group linked to in the audo blog you posted, but I can't figure out how to join, as pictures are apparently in members only. As for change, that seems the only constant. What about when they return to new housing tracts where there was field? A lake where there was stream.... In the wild forests burn, landslides change, old trees fall, new ones grow taller. Change is one of the few constants. Still, it seems the birds are on the move for whatever reason. I am a need to know person. Can you tell?

Because of the weather changes,when the migratory birds return they find everything is different. Just imagine coming back home only to find that it is not your home anymore. that kind of feeling.

That is somewhat the norm for us. But I'm thinking more on a wide scope. Our springs have been later and later each year for several years, our winters somewhat earlier. I know there was an Osprey looking around our place when the floodwaters were up, but left when the hawk pair chased him off. Just as well. It would have been too far from major water to next!

It was raining hard two days ago. It is warm today. I bet when the weather fluctuates so much it confuses the wild life!

I know,right? Seriously. I've begun subscribing to the Oregon Bird On Line list and many people are reporting out of place birds, or delayed or early migration. Goodness knows we have had some crazy weather, which would make sense. While the rest of the country is under red flag, it's been cold and wet here, and many of the northern breeding populations haven't left yet

OBOL had reports from their N California spotters that the caracara was still in the crescent city area as of last weekend. We're hoping to make the trek down this weekend - and has apparently been there for some years.

Liam: the ebird chart is interesting. Makes me wonder if that's one bird seen coming up the coast, or if they're breaking some barrier and moving north.

Emma, yolo and Solano counties are quite a ways from where the one I saw is.... dare I hope he/she will have a mate one day?

Of course, Liam. I did do some digging and found references to this guy on http://birdingonthe.net/mailinglists/CAL... and apparently he has been in the area for 4 years. That floored me as we are in that area at least 4 times a year. But, he is noted as hanging around over at the mouth of the Smith River, so that's where we are going next time.

Karen, is it alright if I report this sighting to the ABA Rare Bird group? I'm sure people would love to know about this.