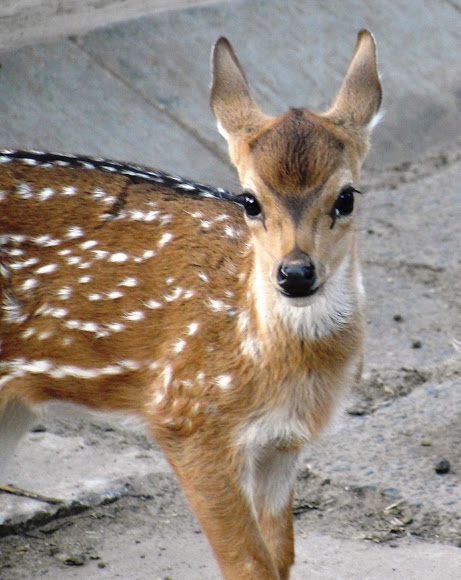 The chital's coat is pinkish fawn, marked with white spots, and its underparts are also white. Its antlers, which it sheds annually, are usually three-pronged and curve in a lyre shape and may extend to 75 cm (2.5 ft). Compared to the hog deer, its close relative, the chital has a more cursorial build. It also has a more advanced morphology with antler pedicles being proportionally short and its auditory bullae being smaller. It also has large nasals. It stands about 90 cm (3 ft) tall at the shoulder and masses about 85 kg (187 lb), although males tend to be larger than females. Its lifespan is around 8–14 years.

@ Anjali,, can see the difference in the eyes between captive and wild animal,

Agree with you Emma,

Ashish not very much sure, as there are so many and playing over there, but It seems to be same,

Those eyes are irresistible...
Nice photo!

Welcome Sachin...
This is India's one of important Bio-diversity's Flagship Mammal.
Many Foreign Biologists come to India to study them.

They are very sensitive and have to handle them very carefully. Mishandling can cause their death. This cub is very cute one.

This is Chital Deer..
http://en.wikipedia.org/wiki/Chital