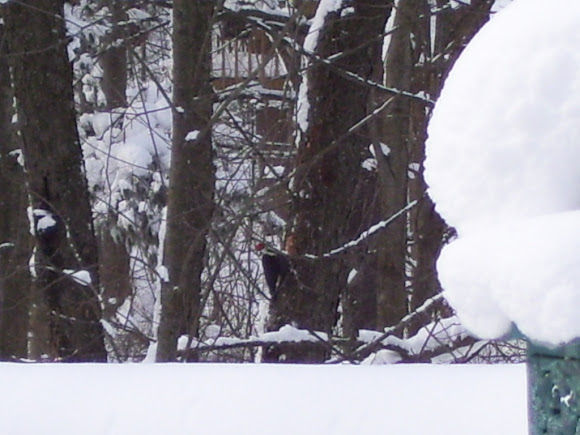 The Pileated Woodpecker (Dryocopus pileatus) is a very large North American woodpecker, almost crow-sized, inhabiting deciduous forests in eastern North America, the Great Lakes, the boreal forests of Canada, and parts of the Pacific coast. It is also the largest woodpecker in America. Adults are 40 to 49 centimetres (16 to 19 in) long, and weigh 250 to 350 grams (8.8 to 12 oz). They are mainly black with a red crest, and have a white line down the sides of the throat. They show white on the wings in flight. Adult males have a red line from the bill to the throat, in adult females these are black.[2] The only North American birds of similar plumage and size are the Ivory-billed Woodpecker of the Southeastern United States and Cuba, and the related Imperial Woodpecker of Mexico. However, unlike the Pileated, both of those species are extremely rare, if not extinct. Most reports of the Ivory-billed Woodpecker are believed to be erroneous reports of the far more common Pileated. http://www.projectnoah.org/spottings/898... call is a wild laugh, similar to the Northern Flicker. Its drumming can be very loud, often sounding like someone striking a tree with a hammer. This bird favors mature forests and heavily wooded parks.. -- Wikipedia

Their breeding habitat is forested areas with large trees across Canada, the eastern United States and parts of the Pacific coast. -- Wikipedia

This beautiful creature spent about 2 weeks hanging out in my back woods chomping away and making all kinds of racket in the neighborhood. Pictures 2 and 3 show the leftover holes in one of the trees he went after.