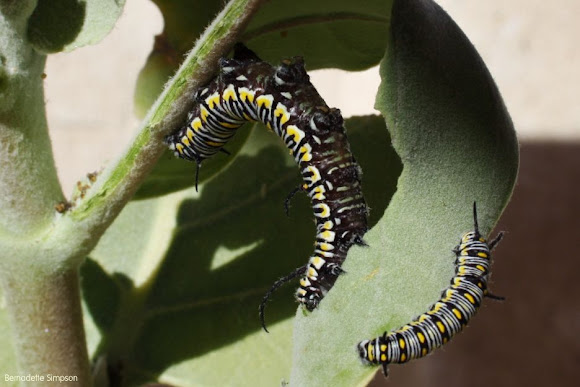 The Plain Tiger is believed to be one of the first butterflies to be used in art. A 3500 year old Egyptian fresco in Luxor features the oldest illustration of this species. :-) The caterpillar is uniformly cylindrical. Its body is covered with bands of black and white interspersed with thick, yellow, dorsolateral spots. The most striking characteristics are the 3 pairs of long and black tentacle-like appendages. The first pair is moveable and also the longest. The tentacles are present on the 3rd, 6th and 12th segments. The head is shiny, smooth and has alternating black and white semicircular bands. The legs and prolegs are black and the prolegs have white bands at their bases. The Plain Tiger is a medium-sized butterfly with a wingspan of about 7–8 cm. The body is black with many white spots. The wings are tawny the upper side being brighter and richer than the underside. The apical half of the fore wing is black with a white band. The hind wing has 3 black spots around the center. The hind wing has a thin border of black enclosing a series of semicircular white spots. (wiki)

It is found in every kind of country including the desert (pending availability of food) and right up into the mountains till 9000 feet. Primarily a butterfly of open country and gardens. (wiki)

Branches of the host plant (Calotropis procera) with several caterpillars in different stages of growth were collected from a plant growing in a local playground for the purpose of a school science project where my student would observe the life cycle of a butterfly. The photos of the caterpillars were taken on January 12th. The photos of the butterfly were taken February 16th, the day he emerged from his pupa. Not sure which butterfly grew from which caterpillar, but this was the last of 3 butterflies that emerged.

I have a photo of a pupa that I'm pretty sure is a Plain Tiger, but not from these caterpillars. I do know that the pupas of these caterpillars were white because they built them on inanimate objects (for some reason they left the plant and the pupas were on the students' paper mache projects!).

Yes, with the pupas the cycle would be complete. I have spottings of some caterpillars and I don´t know the corresponding butterfly.

Thanks! Just wish I had gotten a shot of the pupas...

Great series and great you show the butterfly!