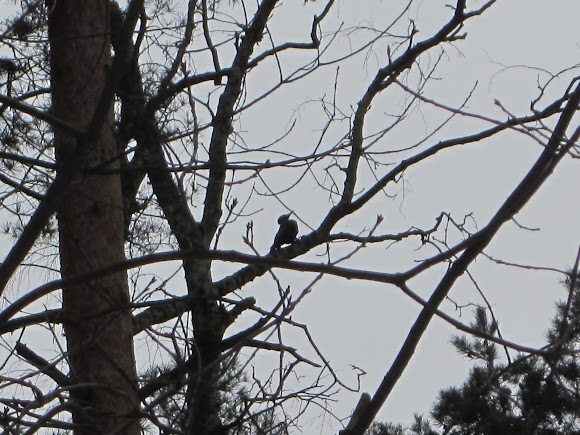 ----This species is closely related to and fills the same ecological niche in Europe as the Pileated Woodpecker of North America. ---It lives in mature forest across the northern palearctic. It is the sole representative of its genus in that region. Its range is expanding in Eurasia. It does not migrate

The woodpecker feeds by using its bill to hammer on dead trees to dig out carpenter ants and wood-boring grubs. Their voice is remarkable in that it has two different calls. One is a short single high-pitched note done only twice in a row. The other is a screech-like shrill while in flight. Unlike other woodpecker species, the Black Woodpecker does not have a dipping, bounding flight. The woodpecker digs a nest hole, usually in a live poplar or pine tree where it lays four or more eggs ---- found her, while mushroom-huntig. I followed the pounding, tried to come closer than this, but she got nervous, so i decided to be satisfied with what i already got, while sneaking on to her, and continued my M-hunt. She was completly dark, i don't noticed any marking, so i looked up some infos and assume: it was a "Black woodpecker" female!! Would not post such quality, when spotting those woodpecker, would be normal for me! the last one, a while ago, flew away, while i was still locating him!