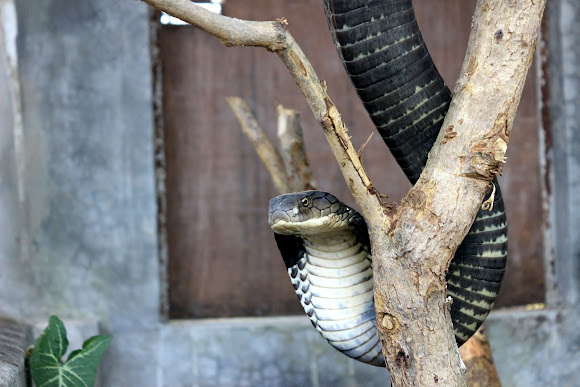 The king cobra (Ophiophagus hannah) is an elapid found predominantly in forests from India through Southeast Asia. This species is the world's longest venomous snake, with a length up to 18.5 to 18.8 ft (5.6 to 5.7 m). Despite the word "cobra" in its common name, this snake is not a member of the Naja genus ("true cobras"), which contains most cobra species, but the sole member of its own genus. It preys chiefly on other snakes and occasionally on some other vertebrates, such as lizards and rodents. The king cobra is a dangerous snake that has a fearsome reputation in its range, although it typically avoids confrontation with humans when possible. The king cobra is a prominent symbol in the mythology and folk traditions of Pakistan, India and parts of Southeast Asia.

The king cobra is distributed across the Indian subcontinent, Southeast Asia, and the southern areas of East Asia (where it is not common), in Bangladesh, Bhutan, Burma, Cambodia, China, India, Indonesia, Laos, Malaysia, Nepal, the Philippines, Singapore, Thailand, Vietnam and southern China. It lives in dense highland forests, preferring areas dotted with lakes and streams. King cobra populations have dropped in some areas of its range because of the destruction of forests and ongoing collection for the international pet trade. It is listed as an Appendix II animal within CITES.

This beautiful creature of the nature, King Cobra (Ophiophagus hannah) was rescued by Mithila Wildlife Trust, Nepal (MWT Nepal) from a residential house of Mirchaiya municipality, Siraha district, Central Development region, Nepal on November 16, 2016 at 7:45PM. The snake was residing inside the ladder house under storage of old wooden planks for over a week. The residents called to the wildlife rescue team of Mithila Wildlife Trust for the rescue. The snake was rescued successfully by the chairman, Mr. Dev Narayan Mandal and was transported to Dhanushadham Protected Forest of adjoining district.

Congratulations DevNarayanMandal!!! It is great to know this beautiful creature was able to be rescued successfully. Thank you for the info and for sharing :)

Brilliant specimen! Thank you for sharing and congrats for the SOTW

Great series DevNarayanMandal,congrats on the well deserved SOTW and thanks for sharing

Congratulations DevNarayanMandal, this great spotting and rescue story is our rangers-selected Spotting of the Week!

Your spotting has been nominated for the Spotting of the Week. The winner will be chosen by the Project Noah Rangers based on a combination of factors including: uniqueness of the shot, status of the organism (for example, rare or endangered), quality of the information provided in the habitat and description sections. There is a subjective element, of course; the spotting with the highest number of Ranger votes is chosen. Congratulations on being nominated DevNarayanMandal!

Hello DevNarayanMandal and Welcome to the Project Noah community!
We hope you like the website as much as we do. There are many aspects to the site and community. The best way to get started is to read the FAQs at http://www.projectnoah.org/faq where you can find all the tips, advice and "rules" of Project Noah. You, like the rest of the community, will be able to suggest IDs for species that you know (but that have not been identified), and make useful or encouraging comments on other users' spottings (and they on yours).
There are also "missions" you can join and add spottings to. See http://www.projectnoah.org/missions . A mission you should join is the http://www.projectnoah.org/missions/2004... chose the best wild photo of 2016,only the spottings added to that mission are eligible.Note that most missions are "local". Be sure not to add a spotting to a mission that was outside of mission boundaries or theme :) Each mission has a map you may consult showing its range. We also maintain a blog archive http://blog.projectnoah.org/ where we have posted previous articles from specialists from different geographical areas and categories of spottings, as well as wildlife "adventures".
So enjoy yourself, share, communicate, learn. See you around :)

Welcome to Project Noah DevNarayanMandal, and thank you for this beautiful and informative spotting! We hope to see more from you.