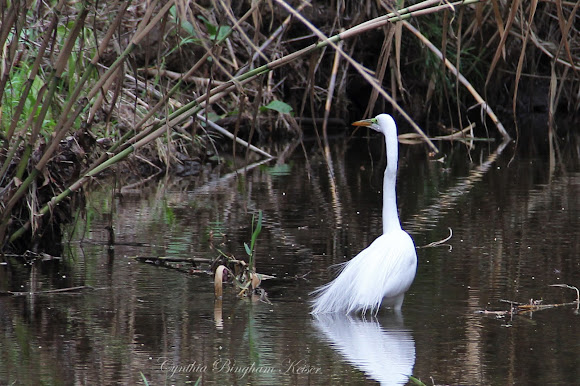 Large, white bird with dark legs, yellow bill and bright green around eyes. "The Great Egret can be distinguished from other white egrets by its yellow bill and black legs and feet, though the bill may become darker and the lower legs lighter in the breeding season. In breeding plumage, delicate ornamental feathers are borne on the back. Males and females are identical in appearance; juveniles look like non-breeding adults. It is a common species, usually easily seen." - Wikipedia

This one was in a slow creek and up on the bank at Kit Carson park.

Aka Great White Egret, Common Egret, or Great White Heron. "The Great Egret feeds in shallow water or drier habitats, feeding mainly on fish, frogs, small mammals, and occasionally small reptiles and insects, spearing them with its long, sharp bill most of the time by standing still and allowing the prey to come within its striking distance of its bill which it uses as a spear. It will often wait motionless for prey, or slowly stalk its victim." - Wikipedia

This was a lone Egret. Thank you for letting me know about your mission. I'll join and add now!

Was Snowy around? It looks like they are best buddies. When ever I spot a big egret,the Snowy egret is always around!!
Cindy ,check this out .I made it for the sheer joy these birds have brought to me.
http://www.projectnoah.org/missions/8995...

I agree. They're even more beautiful with the delicate looking plumage.

Thanks Emma for introducing me to the breeding plumage of this beautiful bird. I finally spotted one!

Thank you Gerardo and Ashley. I was so happy to see this beauty in the stream. It's been a very stormy day and the water was so calm in this protected area. This beauty brightened up my day!

I love the shot in the water, so peaceful!