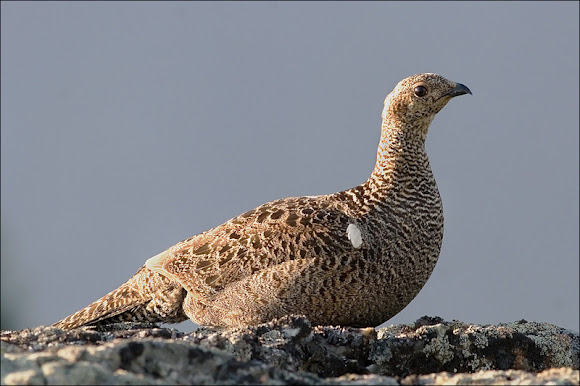 The Caucasian Black Grouse (Tetrao mlokosiewiczi) is classified as a species of global conservation concern that is endemic to the Caucasus region. It is one of the grouse species with the smallest distribution (about 12,000 sq. km) and highly fragmented range. Total population is believed to be from 10,000 to 70,000 individuals. As with many gamebirds, the cock (male) is larger than the hen (female), measuring 50–55 cm compared to her length of 37–42 cm. The cock is very distinctive, with all-black plumage, apart from red eyebrows, and a long, deeply forked tail. The female Caucasian Grouse is grey with dark barring, and has a cackling call. The juvenile male Caucasian grouse is very similar in appearance to the female, with grey-brown plumage The Caucasian Grouse is a sedentary species, breeding in the Caucasus and Pontic Mountains of northeast Turkey on open slopes with low Rhododendron or other scrubs. These bird have a group display or lek in May and June. Unlike the male Eurasian Black Grouse, the Caucasian Grouse display is almost mute but for a thin whistling of the cock fluttering his wings as he leaps and turns in the air, producing a flash of white as the underwing feathers are briefly revealed.[1] The hen lays up to 10 eggs in a ground scrape and takes all responsibility for nesting and caring for the chicks, as is typical with gamebirds.

The species distribution covers six countries –Georgia, Azerbaijan, Armenia, south Russia, northwestern Turkey and small part of north Iran. The species is listed in the Red Data Books of all range countries as rare with declining populations, and is included in international listings: Species of European Concern, category 2 with status “Insufficiently Known”; as a Restricted-range Species; and in the 2004 IUCN Red List of Animals as “Data Deficient”. It is also listed as one of the highest priorities for action in the IUCN/WPA Grouse Specialist Group Action Plan. Due to its small range, the difficulty of access to its remote, high mountain habitat, and its relatively small population, it is a poorly studied species.

However, only c. 5-7% of the species’ total range is officially protected (in Georgia just 3-4 %). The major threats to Caucasian Black Grouse are believed to be: 1. Habitat loss and degradation caused by increasing grazing pressure, deforestation, erosion, and development; 2. Predation by shepherd dogs as well as stray dogs are believed to have a negative impact killing adults, chicks and eggs of this species; 3. Illegal hunting that has been particularly increased during last 10-15 years. In addition, high fragmentation level of habitat of individual populations can be challenging for this species - the connectivity level of West and East Caucasus populations and Greater and Lesser Caucasus populations seems minimal to support population viability. The fragmentation level seems higher in the more urbanized and developed southern part of species range than in the northern part. This can cause local extinctions, particularly where habitat damage is cause by large development projects. These concerns needs further study, and their clarification is essential for effective species conservation management. Georgia is the country with the central location and largest proportion of Caucasian Black Grouse range - about 50% of the range and 45-55 % of the individuals are believed to be in Georgia. Georgia is also the only country containing both Greater and Lesser Caucasus populations. As in other parts of its range, lack of data is the main problem. In order to conduct effective conservation management, more precise information is required on species distribution and habitat requirements, population ecology and genetics, and potential and actual threats.

Thanks to all of you. Georgia is unique by nature. I intend to make my country more popular here. :)

Very nice series with the female, male and eggs!

As this is such a special spotting amurchik could you tell us more about your encounter with these birds?

Great spotting.. Thanks for sharing.