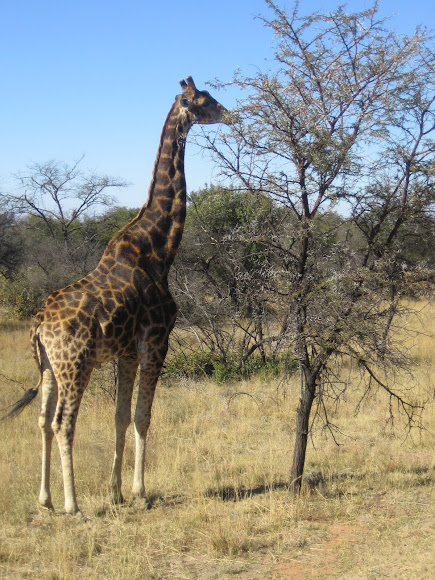 The giraffe is an African even-toed ungulate mammal, the tallest living terrestrial animal and the largest ruminant. Its specific name refers to its camel-like face and patches of color on a light background, which bear a vague resemblance to a leopard's spots. The giraffe is also noted for its extremely long neck and legs and prominent horns. It stands 5–6 m (16–20 ft) tall and has an average weight of 1,200 kg (2,600 lb) for males and 830 kg (1,800 lb) for females. It is classified under the family Giraffidae, along with its closest extant relative, the okapi. There are nine subspecies, which differ in size, coloration, pattern, and range.

Giraffes usually inhabit savannas, grasslands, and open woodlands. They prefer areas with plenty of acacia trees, which are important food sources, and can browse at heights that most other herbivores cannot reach.