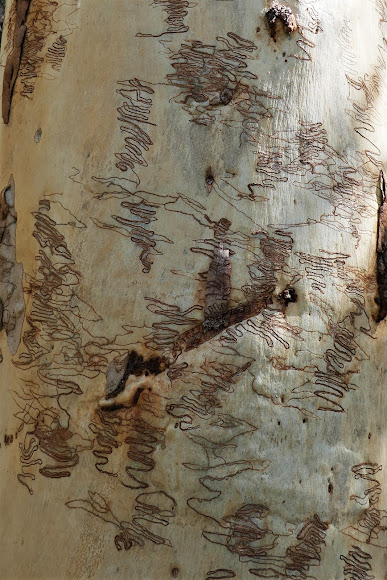 One of my favourite eucalypt species, these trees are seriously fascinating and beautiful. Eucalyptus haemastoma, commonly known as the "scribbly gum", is an Australian eucalypt that is named after the "scribbles" on its bark, and it is certainly true to its name! These zigzag tracks are tunnels made by the larvae of the scribbly gum moth (Ogmograptis scribula) and follow the insect's life cycle. Eggs are laid between layers of old and new bark. The larvae burrow into the new bark and, as the old bark falls away, the trails are revealed. The diameters of the tunnels increase as the larvae grow, and the ends of the tracks are where the larvae stopped to pupate. Even on the highest branches of these trees, the scribbles continue. Distribution of Eucalyptus haemastoma is restricted to the coastal plains and hills in the Sydney region.

Spotted in dense native bushland on the Warrimoo Track at Bobbin Head, on Cowan Creek. The track follows the waterway which is a saltwater tributary of the Hawkesbury River and Broken Bay, on the northern outskirts of Sydney. Bobbin Head lies within steep terrain that is heavily wooded, in Ku-ring-gai Chase National Park. Native vegetation runs right down to the rocky shores along the entirety of creek. Here's some park info - https://www.nationalparks.nsw.gov.au/thi...

Within the Eucalyptus genus there are several species that all bear the common name "scribbly gum", three of which are also found in NSW: E. racemosa, which is found nearby; and E. rossii, which is found on the western slopes of NSW. I also spotted another species on North Stradbroke Island in Queensland: E. signata. It ranges from Morisset in NSW up the coast and ranges to beyond the Queensland border.

It was just a chance spotting, Roy. I do love these tress, and I love the look on people's faces when they encounter them. It's usually the expression of wonderment and always includes a smile. My brother said that of me when I made this spotting.

Thanks, Liana. Yeah, graffiti by a 2 y/old with a marker pen drawing on the wall. This tree was quite an amazing specimen.

Natural graffiti :D Great reading about them Neil. Thank you for sharing :)

Thanks, Brian. They are really cool trees. I could look at them for hours.